On a swig and a prayer 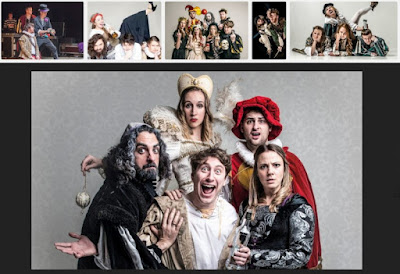 It's a worthy undertaking "to introduce a new generation of theatre-goers to the works of the Bard by reviving the raucous, interactive and vibrant nature of Elizabethan theatre with a very modern twist – reminding them as we go to always enjoy Shakespeare responsibly". Thus does Shit-faced Shakespeare. They perform truncated versions of Shakespearean plays with one or more actors "shit-faced" after a few hours of solid alcoholic preparation. This time it was Midsummer Night's Dream after most of a bottle of Smirnoff downed by Lysander. The background is: Demetrius is betrothed to Hernia; Hernia and Lysander love each other; Helena loves Demetrius. Hernia and Lysander elope to a forest. Demetrius and Helena come later. They variously encounter the malevolent sprite, Puck, who has a love flower that has the power to induce immediate and powerful love. There are various misunderstandings, arguments, expressed desires, unfortunate sightings resulting in intense loves, some fights, transformations of Bottoms with ass heads and thus like. All as you like it. It's funny. It's considerably shortened from the original and often improvised. Lysander forgets his lines and at least once hears them echoed from Hernia: that was obviously improvised and funny. Otherwise there were lots of laughs and swearing and sweating. They are moderately funny. One improv was particularly amusing. I'd noticed that Helena's PA feed was lost. Soon after, the host came out to change batteries in a pouch behind her back and the show must go on even with techo in tow. That was nicely done: Helena seemingly oblivious (but obviously not). The end in the original sees lovers together and married preparing for bed. This take sees two lovers too, although a much more contemporary pairing which went down well, as it would. The show was funny and sometimes hard to catch - as Shakespeare mostly is to our ears - and perhaps the audience didn't partake quite as vigourously as the company wished, but much enjoyed.

Shit-faced Shakespeare presented their take on Midsummer Night's Dream at The Street for the Canberra Comedy Festival.

Thanks to whoever photographers provided the Google images above
Posted by Eric Pozza at 11:26 am