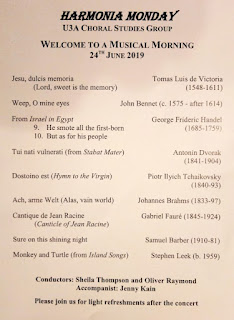 My singing is not the most renowned, but I struggle with the tenor parts and Harmonica Monday gets it pretty right on the night. HM is a modest group, practicing mornings and performing for friends and relatives and taking on the most satisfying on repertoires. This concert covered the waterfront for choral eras, from mediaeval through to modern, extant, Canberra compositions: de Victoria, Bennet, Handel, Dvorak, Tchaikovsky, Brahms, Faure, Barber and Canberran international choral master, Stephen Leek. His piece was a quirky song from the northern Australian islands, Monkey and turtle. Fabulous fun. There were some seriously interesting harmonies and considered parts displayed. Nice one.