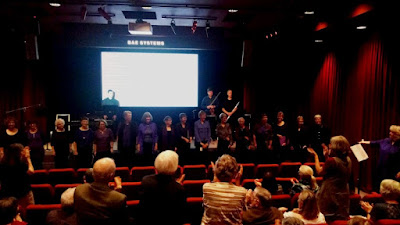 This performance had me in a right quandary. There were so many issues to mull over and recoil from and despair of. I could have expected such a thing from our local group, A Chorus of Women. Their first performance was at Parliament House in 2003 in protest against the Iraq War. Not that it did any good, like the other protests, despite no WMDs and clear evidence against them from UN investigations at the time. And this performance was at the War Memorial, in the presence of its retiring head, a minister in the government that sent Australia to that very war. He introduced the concert by talking of a new exhibition about peacekeeping under an intrusive, illuminated sign for the sponsor of the theatre, itself a weapons producer. He announced that the peacekeeping exhibition will become permanent with the $500m AWM expansion which has been met with such disapproval, this being democracy and all. ACOW gave an abridged presentation, part concert, mostly slide-supported discussion, on the women's movement for peace around WW1. The full work was performed a year-or-so ago as The Peoples' Passion by Glenda Cloughley. Glenda was a major participant this day, too. Johanna McBride conducted. The choir is ~16 mature women, here accompanied by Lucus Allerton, John Smiles and Chris Latham. They took us through the stories of Jane Adams and the Traumatine March, Vida Goldstein, Eglantyne Jebb and various others, the 1915 International Congress of Women and its unanimous resolutions and their influence on the League of Nations, Julia Grace Wales and the Wisconsin Plan, the blockade and starvation in German/Austrian Europe after WW1 and the formation of the Save the Children fund. They spoke to the like-minded, introduced stories that are sadly little known, welcomed the Women's International League for Peace and Freedom. So my quandaries? That our marches and actions have such little influence; that we can so easily drop into tribal thought and speech (I have a go at the Left for this, being as I am a privileged, white, boomer male); that all this happened here, at the AWM, once so pure, increasingly a tool for the culture wars; that the welcome to country was so heartfelt while AWM refuses to recognise our own frontier wars. ACOW is for the good but I'm not sure how much change they can influence. Nor the rest of us given climate, Iraq, housing, NBN, subs, robodebt [now found illegal!] ... and SM's recent election victory. Nonetheless, I wish them well.

A Chorus of Women performed at the Australian War Memorial under Johanna McBride (conductor).
Posted by Eric Pozza at 11:29 am