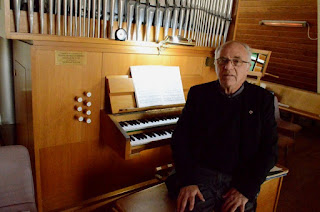 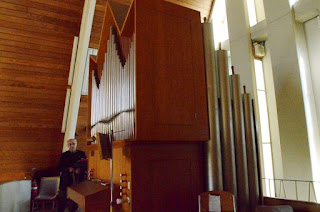 I expect there are a lot of musicians out there in Covid-land who are a little rusty With the best intentions, we mostly don't manage to practice all day even when we have the time. We miss those upcoming gigs that prompt the preparation. So it was, to some degree, when I got to a return Royal Society of Church Music (RSCM) organ recital. The planned organist pulled out due to lack of preparation. Bill Fraser, a stalwart of the local organ scene, filled in. He told me he was missing the normal preparation himself, but he did a worthy job on a string of interesting pieces from Baroque through to last C19th. The concert was in St Peter's Lutheran Church, Reid, with a German-made baroque organ that sounded great to me and filled the A-frame church nicely. Interestingly, Bill told me this is a mechanical organ, so keys are linked with bars to pipes. The more common current style is electro-mechanical with actuators controlling airflow; presumably cheaper and easier but not always preferred. just closed my eyes and enjoyed it immensely. Organ is so satisfying, big and full and sweetly toned, and this concert had a series of apt tunes, a Corelli violin sonata transcribed and an early Bach Prelude and Fugue and two choral preludes by Merkel and Brahms. We heard a Mendelssohn allegro taken from a manuscript, called the Berlin-Krakow, of uncertain ownership like various other removals from Germany after WW2. I remember seeing a few remaining pieces of the plunder of Troy in Berlin, with reference to the rest of the collection being held in Russia. Again, conflicts over ownership. Of course, there could also be some query over Germany's ownership in the first place. At least they are not lost to humanity. And a few late C19th Australian works, religious and very satisfying. So the gigs are up again, perhaps only while they last. Let's catch what we can, within the limits of social distancing, of course.

Bill Fraser performed for the RSCM (ACT Branch) at St Peter's Lutheran Church, Reid.
Posted by Eric Pozza at 11:05 am