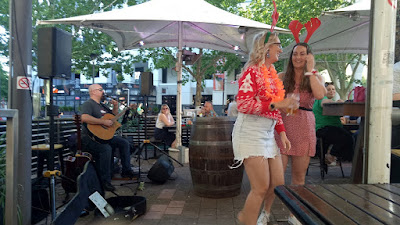 My rush off was to Civic and a political meeting.  It was held in King O'Malley's, out back, above the bar, in the Snug Room.  Noisy as, but the beers were good.  That's apt for a centre-leftie get together.  Just a few people from the Canberra branch of the Australian Fabians.  The Fabians have a long history as a democratic socialist (~=Labor) grouping in England with members including the likes of George Bernard Shaw, HG Wells, Annie Besant, Ramsay MacDonald, Emmeline Pankhurst, Bertrand Russell, Sidney and Beatrice Webb and Havelock Ellis.  It was a disappointingly small turnout but an intellectually astute one, with economist and convener Lachlan presenting on 2020 as the year that (nearly) killed neo-liberalism.  We'll see, I guess.  There may not be much belief anymore, but there are influential parties that benefit from it, so I expect all bets are off.  Given attendance and our current government (and maybe Aussie voting habits), change doesn't look too imminent.  Outside, it was different.  Lots of people, for Covid-free ACT times, Christmas, Friday night, lust and the rest.  Lots of noise and partying.  Some music from guitar/singer Matt Dent singing and strumming against a recorded accompaniment.  Nice for the beery hot circumstances.  Suffice to say it's the busiest I've seen all year, if not in the Snug Room.

Matt Dent (singer, guitarist) entertained at King O'Malley's.  The Canberra Chapter of the Australia Fabians cogitated in the Snug Room.