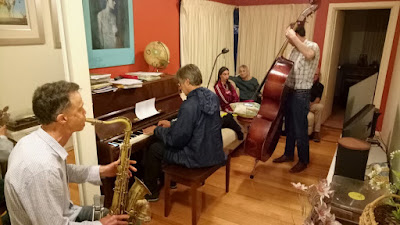 Great that Melbourne is open again because Richard M could have his distant family in town and with them came partner Jules Pascoe.  He's a professional player in Melbourne, playing in a band called The Conglomerate which includes two members of Cat Empire.  So decent players.  I'd lent my bass no.2 for a jam with Jules, Richard and Mike Dooley and in the end, I could get over for a short visit.  Jules was playing a storm and especially in his solo.  Lovely; very impressive.  Mike and Richard were doing admirably too.  It's a wondrous thing about jazz, that people can just name a tune they know or pull up a chart and play with anyone.  That's jazz training.  Nice to meet you, Jules.