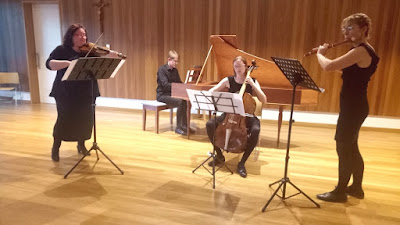 My concerts are relatively few C(ovid)E but Limestone Consort is one I have got to.  Their concerts are small and intimate; the music is delightfully aged, often somewhere around Bach but also challenging Mozart; the composers are lesser knowns and we hear talk of them from Lauren and the others.  What is it about this era that I so delight in?  It's dignified and stately, presumably written for courtly life, often relatively simple and frequently very danceable.  Dancing is one of its functions, along with impressing visitors and sometimes providing music for the lords and families to perform.  All those things, and that other world of one religion unto God and the associated certainty.  Our only certainty is climate failure and civilisational collapse (listen to Parliament and you wouldn't know it) so it's nice to take an hour off for Quantz and Dall'Abaco and Scheidt and Lanzetti and a Bach that has an precarious provenance and sounded just a little odd to me.  Such a pleasurable outing with entertainment and information from Lauren and Clara and James with visiting flautist Jennifer.  The balance was just a little awry, the flute was mild but the harpsichord was diminutive, but the playing was heartfelt.  They played a mix of combinations so I could hear James playing solo variations by Scheidt and it was lovely.  Clara was firm and omnipresent on cello which pleased this bass-ender.  These are the lines we play in counterpoint and harmony and she did them with real purpose.  Lauren was joyous and melodic above and also Jennifer, if not so prominent.  The flute and violin playing together were lovely in reference and response to each other.  Again, the nature of the style.  As were the gut strings and baroque flute and genuine harpsichord.  So lovely and satisfying and too soon ended.