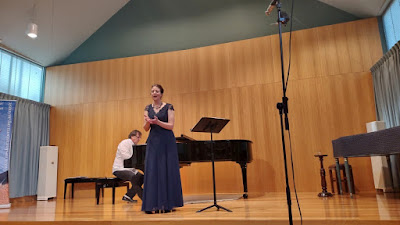 I find Art Song is its own world and oddly outside our modern experience.  I don't feel that with Beethoven or Bach or with choral music and I love the voices and the accompanists can be superb.  I heard some today, a fabulous pairing of Susannah Lawergren and Maciej Pawela: her great voice that singes the atmosphere, strong and broad and high; his detailed and delicate piano that told stories that matched her lyrics.  I think it's the lyrics determining the music that presumably makes art song.  (It's something I think also of the Beatles and how they wrote music).  So Susannah at one stage sang of lapping waves and I could hear it in the accompaniment.  Quite a feat.  But the lyrics can be so much of the romantic era, so much of love or nature or passion.  In fact, these four works spoke of the Australian sky, the Norwegian sky, the Australian beach and the Swedish spring (with a tragic love story thrown in).  Apparently the Swedes have an obsession with Spring which doesn't surprise me given their northerly climate.  So told us Susannah, apparently she with Nordic ancestry.  So the singing and the accompaniment were to die for, if the themes were strangely romantic.  So, I enjoyed it but it dumbfounded me in some ways.  But I learnt a few words of Swedish while following the lyrics.  So good.