Not so much sublime 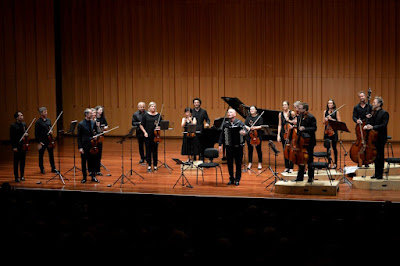 That's not a title to demean the Australian Chamber Orchestra because they do a superlative job every time I hear them, but this was a concert of tango, Piazzola+, and that is worthy of adulation, but sublime doesn't seem the word to me.  Seductive, slithery, sinuous, sultry, spirited, yes, but sublime I think I'll keep for other musics.  Not to say I don't love it, I do, and I thought ACO did wonderfully and had a fabulously varied and challenging program within the self-set limits.  (Nice to see themes like this for concerts.  ACO has one coming up soon with Corea and Miles as a theme and with invitees Matt McMahon and Phil Slater).  The invitees for this concert were James Crabb and Stefan Cossomenos.  JC played a "classical accordion", the button accordion with screeds of buttons in place of the piano keyboard, so not strictly a bandoneon, but it sounded great none-the-less.  SC played piano.  Of course, JC had the prime role here, sitting central on stage with the orchestra surrounding him, and he put on a great show.  There's a showman in this muso but also a sense of dynamic play.  And the music was so satisfying and surprisingly varied.  First set was Libertango (inevitable and hugely inviting), then Agri/Carli with a piece that sounded all the world like Nino Rota and Fellini films, then Handel, which seems way out of left field but it worked, playful as it was, then an end with Elena Kats-Chernin Torque, a long tune of some madness written after her car broke down and she wished to understand something of mechanics.  Strange, but impressive.  I got a bit lost in the second set, not having the program to hand and unsure of pieces and movements played attacca.  First up, Gardel then Frank then Villa-Lobos, then a series of Piazzola tunes arranged by JC.  I variously heard more Nino Rota (showing the influences of the time) and a wonderful fugue possibly the second movement of Villa-Lobos, and otherwise some lovely sweet dotted rhythms fully in a jazz sense.  I was amused by the bassist with finger sheathes; I guess he's not a jazzer and he's suddenly discovering what extended jazz-styled pizz can do to soft skin, especially maintianing volume as one bass amongst many.  All fabulous and inviting.  Some odd slithery techniques for classical players, too, from the tango repertoire.  Lovely, sometimes simple,  always tuneful.  Loved it.