The sounds of Spain 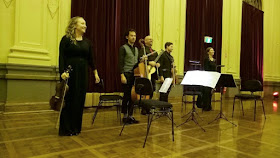 Our mates, the Australian Haydn Ensemble, were back in town again, this time at the Albert Hall. Just a small format of five players: a string quartet with a guitar. The theme was Spanish music at the end of the 17th Century and everyone think guitar when they think of Spain. Several works featured guitar and all had some relevance to Spain. Boccherini was Italian but he fell in love with a Spanish opera singer and toured with her company. He had two works, a string quartet (op.26 no.4 Amaj) and a guitar quintet (Fandango Gmaj). Mozart wasn't Spanish and neither was Porro who arranged his K.304, but the odd combination featured guitar with violin and cello. Canales was Spanish and worked for the Spanish court and was influenced by Boccherini. AHE played his string quartet op.3 no.2 Cmin. Perhaps the least of the connections was Haydn's op.51 Seven last words of Christ our saviour on the cross that was a profound experience for a congregation in Cadiz. But a worthy piece anyway. And one final work for solo guitar, Sor Into and variations on a theme by Mozart op.9. The strings were gut with bows to match and the guitar was an interesting modern copy of a romantic guitar by Australian Johann Stauffer: small bodied with an adjustable neck and violin-like tuning pegs. The sound of the guitar was lighter, sharper, thinner than a modern classical but it all fitted nicely to give a treble lift to the gut strings. The playing was lovely: detailed, conversational, lithe, sometimes quiet as to be discrete. And the informative chats and casual interactions after are a pleasure. Loved it yet again.