It's not strictly Canberra Jazz, but it happened here. The catholics came to Canberra to perform for the Multicultural Festival, and also for a more intimate performance at Hippos.

I had seen them years ago, mid-90s or thereabouts. At one stage during the night, Lloyd Swanton said they’d been together for 14 years, so they were already well established. They all have other projects. They have just recorded their 5th CD (or 4th and a compilation?). Some players were still there from the concerts I saw 10 years ago – Lloyd Swanton (bass), Sandy Evans (tenor & soprano sax), James Greening (trombone, and a very little trumpet) and Fabian Hevia (percussion). The guitar, drums and slide players are changed.

I was most blown out by James Greening. Stunning, clear, articulated trombone solos – it’s rare that you hear postbop-style lines like this on a trom. And Sandy Evans was superb. She’s little, and the tenor practically reaches her knees, but her lines are big and complex. Plenty of lyrical playing, but with detours into sheets of notes at varying levels of dissonance. And together, Sandy and James create these hauntingly beautiful and precise harmonies which define several of their tunes.

The rhythms were fairly standard: reliable latin throughout by Hamish Stuart on drums and Lloyd Swanton. I hadn’t taken note, but my drummer friend observed there wasn’t a swing throughout the night. Jonathan Pease on guitar was lyrical (at times, with a bell-like strat tone to die for) as was the Bruce Reid on slide guitar. I’m not up on these instruments, but I think they were a lap steel and a resonator of some kind. Nice solos too on bass, and a lovely one by Fabian Hevia on percussion early in the night. (How can you not love the dissection of rhythm that is a percussion solo?)

The whole was put through a JBL rig with sub-bins and mid/high boxes. Rare for a jazz-related gig, but more balanced, compressed and powerful. I enjoyed it, but I did hear negative comments about it being overpowering. It was not rock-loud, but still pretty solid.

The overall effect was rich and accurate, with stunning competence in solos, and beautiful, lyrical melodies against the rhythmic complexity that you can only get with a large rhythm section.

They are running an email list if you wish to find out more, but I coudn't find a URL. Good luck. 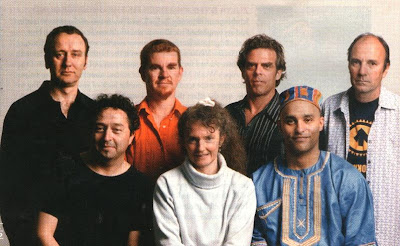 A great pic, but not the current catholics line-up
Posted by Eric Pozza at 6:40 pm