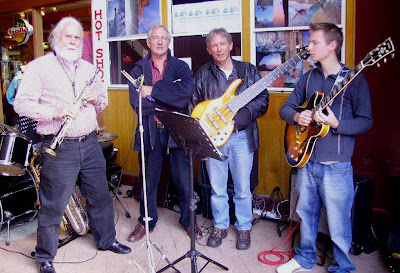 Pierre's Dream Team played Thredbo over Easter. Now here's a handsome group! Pierre Kammacher (various saxes), Rod Andrew (drums), Eric Pozza (bass) and Daniel Hunter (guitar). It was cold at times, and fingers suffered from winds coming off the mountains, but the views of fresh snow on the hilltops was impressive, the days were sunny, and people were relaxed and enjoying themselves.
Posted by Eric Pozza at 6:08 pm No comments: 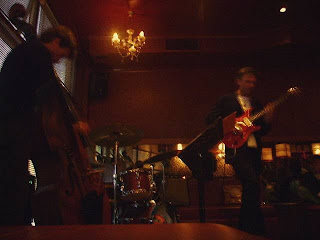 The Carl Dewhurst Trio played last night at Hippos. It was a fabulous display of musicianship. CDT are (or at least were on the night) Carl Dewhurst (guitar), Cameron Undy (bass) and Evan Mannell (drums). Carl and Cameron grew up in Canberra, apparently attending school together at Philip College, so it was a homecoming, and it seemed they were surrounded by friends and family.

CDT played three sets. The first two were original charts. The third comprised more obvious compositions (D blues and a C Blues with clear reference to Ellington’s C Jam Blues) but the Real Book charts made the performance no less creative. The soloing and interaction between players was exemplary throughout. Carl controlled things will complex heads and chordal accompaniments. He could be blisteringly fast, and use all manner of effects, but was mostly just used a hard electric guitar sound, reminding me at times of Mahavishnu Orchestra (others would find more recent references). Cameron Undy was both solid and interesting, hunched over his bass in concentration. He warmed to some fabulous solos, especially in the later sets. Evan Mannell was on left-handed drums. He accompanied and matched the others in trading fours and soloing.

I asked Cameron if they played together much, and his answer was indicative of the dearth of opportunities for players of modern instrumental jazz. They play perhaps 3 times a year, and he guesses he plays this style live only about 6 times a year, and occasionally in the studio. Otherwise, it’s the musician’s life of corporate gigs and weddings. He analysed the opportunities at Jazzgroove thus: 48 nights per year, with 2 bands per night, ie, 96 performances per year to be shared between ~40 bands. Improvisatory jazz is obviously not the basis of a career. And there’s SIMA.

Given infrequent performances, the level of inventiveness and togetherness is doubly astounding. Excellent art; excellent entertainment.
Posted by Eric Pozza at 5:59 pm No comments: 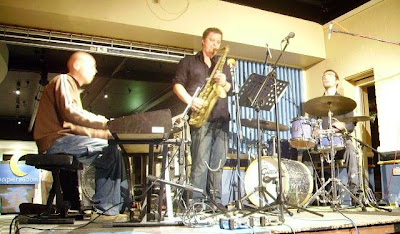 Julian Banks presented last night’s session at the Jazz at the Gods series at ANU. What an eye-opener! This was highly sophisticated and energetic modern jazz, varied in tonality, interesting in harmony and melody, rich in capable and inventive solos, and virtually all from original tunes. The trio is Julian Banks, tenor sax, Damien Slingsby, piano, Sam Young, drums.

Julian played with a lovely, rich tenor tone, moving freely into and out of solos, and sometimes playing time with repetitive phrases. He has looks reminiscent of Mingus, which was doubly odd given there was no bass on stage. Damien was highly accomplished on a Yamaha electric piano, often playing bass lines against solos, freely changing harmonic relationships and always soloing strongly. He performed with eyes closed and head rocking back and forth (impossible to get a decent pic!). Sam both closely followed and defined the rhythms. He played minimalistic but expressive solos, including pitch changes by pressing drum heads - common enough, but nicely done.

Their repertoire was all original other than 2 tunes (“Miles mode” by Coltrane was one), although they finally played another non-original as an encore (You don’t know what love is). Chris Deacon (from ArtSound FM) recorded the concert, and it will be played on ArtSound in a month or so, probably on the Jazzwaves program one Sunday night at 8pm.

Julian finished the concert by thanking the audience for being appreciative and knowledgeable, but my heart sank when he added that performing for such an audience is rare for a jazz player. As it is for many other serious and demanding (and non-commercial) areas of human endeavour these days. This is both another issue and a tragedy. For now, we just have to rejoice that we have such excellent music in our midst – and support and promote it as best we can.
Posted by Eric Pozza at 6:24 pm No comments: