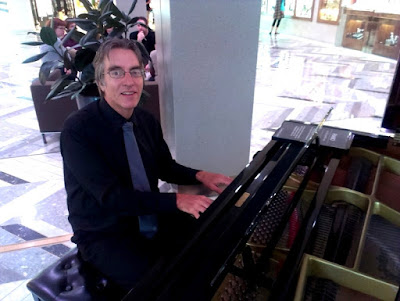 Nice to hear some civilisation and see a mate in Civic. This was Mile Dooley playing outside the upstairs entrance to DJ's. I caught him before Christmas. He's had a break for some Christmas family camping, but was there again on Friday. Nice solo piano on a nice Yamaha grand. Standards like Autumn leaves and suchlike, nicely embellished and twisted. I stood over him and caught some great piano bass work on Night in Tunisia. Very nice. Jazz is seen as the undemonstrative tinkling of the bourgeoisie by some and pop and rap has the politics and affinity. Not sure I totally agree, but, whatever, Mike does it well.

Everything seems black at the moment. Finance is crashing; terrorism is spreading; Abbott's warriors are incredibly still vocal; Trump is incredibly winning his primary; climate-related natural disasters are increasing (I checked this to see whether it's just an artifact of media reporting; it's not); our music school is diminished. But Ross Gittins wrote today to "ignore the gloom" and I caught a nice period concert by a next generation group from the Sydney Con. So there remains hope. This was Ensemble Pendulum. They are recent, perhaps current, students in the Historically Informed Performance stream at the Con. They played courtly, dignified, often danceable, music of CPE Bach and Haydn and Telemann and Locatelli. They played on gut (despite the rigours of changing humidity and Canberra's dryness) with baroque bows, and the flute was wooden. They featured a borrowed harpsichord in Flemish style of the appropriate era. They played with keenness and enjoyment and drive and their performance was loud with reverb in the central hall at the Gorman Arts Centre for a small but appreciative audience, perhaps starved of music after the Summer break (other than the AYO which someone did mention). Thanks to the ensemble for their visit and the delightful and decorous music so nicely played.

I was distracted by family matters for this final AYO concert. I heard CPE Bach and William Walton by TV from the foyer. The Bach sounded lovely in its dignified way, if nothing like the real thing, but the Walton didn't come over so successfully on these little speakers. Perhaps the audio should be better in the foyer, but then TV is standard. I got in for Genevieve Lacey playing three Bach reinventions by Elena Kats-Chernin and they were both convincing with truly impressive recorder playing and a joyous and respectful revision by Katz-Chernin. Alexander Orchestra under Brad Cohen played Stravinsky Suites for small orchestra no.1,2 and they were variously restrained and riotous so very satisfying. Then the ultimate major work of the night and of the Camp, the huge Bishop Orchestra under Erik Nielsen playing Schoenberg Pelleas and Melisande. I remained distracted but caught a huge work of grand scope and strangely not split into movements. One to revisit under different circumstances.

This was the third orchestral concert of the AYO National Music Camp and the penultimate concert for the series. It was a beauty and much anticipated, for the Beethoven 7 and the John Adams. The Carl VIne was less anticipated. In the end, I enjoyed John Adams, played by the Smalley Chamber Orchestra with a conductor. I was intrigued by the loops and the minimal but continuing changes, mulled over the history of the concept of loops given their ubiquity in much contemporary electronic music (and my recent desire to purchase a looper), although I did feel the piece carried on somewhat. Not so all minimalism, but this was quite early and new. But how well played it was, and clearly conducted by Monica Curro. Then Carl Vine Tempest Suite. This was unanticipated because I/we did not know what to expect, other than Australian composer, but how much I enjoyed it. Luscious, balletic music with romantic flourish and expanse. An unexpected gem played by the Alexander Orchestra under Brad Cohen. I followed the conducting and had no idea where his 1 was, but his flourishes seemed to draw nice dynamics from the orchestra and it sounded great. Then the Beethoven symphony no.7 after the interval. I was floored. Typical Beethoven, which I am now coming to recognise from playing a few. Dogged, always moving, never clumsy, incisive starts, canons, quick scherzo and the rest with some dastardly difficult lines for bass and presumably equally so for the other parts. Pretty much scalar, but long scales over the whole neck and back again, and again. Congrats to these kids who can perform such a feat at this true speed. I stand in awe.

Having all the fun

We tend to think of the big bertha orchestral concerts as the peak and they are the best attended and best timed and the ones that get broadcast from AYO to ABCFM, but the Brass/Percussion concert was a thing of great joy and great beauty in its own right (and rite). The first notes were from the large brass ensemble and they glowed with bell-like clarity and corporeal rotundity. This band was trumpets, trombones, horns with a few drums in support. They were playing Strauss Vienna Philharmonic fanfare. What's not to like about a fanfare? Dignified, projected, joyous, warm, full. We were told it was written following his divorce from his second wife. Amusing, too, if true. And so it continued. The percussionists got up for a traditional African drum chant from Burundi. This reminded me of jazz drum solos and not the only time in the night. Then a smaller mix of brass for Rimsky-Korsakov Mlada Procession of the nobles and a string of horns for a Wagner prelude (Act 3) from the Mastersingers of Nuremberg. I felt this last one could be maudlin at times and the tone of the horns lends itself to this. The horns then snuck in an off-program rendition Bernstein Magnificent seven theme. Great. As the compere reminded those old enough to remember, "As a matter of fact, I've got it now". A smaller group of brass with harp and two percussion played the three movements of Shostakovich Jazz suite. That felt at home, especially with the jazz waltz first movement. Then a drum nonet playing Michael Colgrass Three brothers. Nice; reminders of jazz drum solos, again, and some lovely sharp and even sticked bongos that stood out a mile. A trombone ensemble came next. Trombone must be the most luscious and pure of the brass instruments. They played three renaissance dances from Holborne, then a lovely harmony-rich rendition of Gershwin Someone to watch over me. Such melodic sentimentality can never be out of place. Then the larger brass ensemble with the delicate to insanely heavy Prokofiev Romeo and Juliet suite and a cute Love of three oranges march, again Prokofiev. And to finish? I didn't quite catch the intro, but this turned out to be a huge medley of classical and pop themes collected by the percussion ensemble itself. This was truly fabulous and entertaining and worthy of the standing ovation. Sandwiched by intro and finis of 2001 (=Also sprach Zarathustra) with everything from Mozart and Bach and Ravel and Beethoven and Katchaturian to tango and La Marseillaise and West Side Story and Sinatra. All held together with cool jazz feels, some great kit drumming, plenty of marimbas and vibes and glocks and a cavorting conductor and even a ballroom dance accompaniment from two performers to [I did it] My way. This concert was joyous and beauteous but not just that. If I get the chance, I think I'd like to come back as percussion or brass. As long as they count right, their jobs are not too busy and very prominent. They have all the fun (tongue clearly in cheek).

Various AYO Brass and Percussion ensembles played a range of musics with and without various conductors at Llewellyn Hall.
Posted by Eric Pozza at 11:38 am No comments:

Coffee and 500 and the one shot

There were just four of them at this year's National Music Camp and they only get to come to one camp and at that camp they only perform, if that's the word for it, for their one allocated spot at the Composition concert, so the composers may be thought to have a tough time of it. But they are hugely important and central to this whole endeavour and they get to control and guide the whole, and in this case they got to lead the tutors, because it is the tutors who perform the new compositions. It must be a different experience. They all talked of peripheral entertainment, playing 500 or billiards or late night coffees. They could also all talk of the intense work, the development, the ideas that formed or guided or led to a piece. Stephen de Filippo was inspired by a painting of someone peeling a boiled egg for an invalid to create Meal for a convalescent. He had split the group into a trio of percussion, clarinet and viola (perhaps violin?) who led the piece then interacted with the rest of the ensemble, starting quiet and delicate then through tutto passages to a trio ending. Michael Mathieson-Sandars presented Got no coal. This had a political edge, merging melodies from Mozart with an old Union song, music of aristocratic and worker traditions, all treated microtonally and otherwise so the origins weren't too obvious. Unlike the previous, this one started big and receded. Mmm, there's thought here of the modern world, of the 1% and the rest. Then Josiah Padmanabham presented Karin. This was an exploration of characters from the Bergman film, Through the past darkly. This seemed more sparse, hammered piano notes, isolated other notes. Then Daniel Riley with Gravitations. He admitted a nerdy interest in physics and a non-nerdy practice in billiards. Gravitations investigated the idea of kinetic motion, velocity imparted from one ball to another, energy dissipated in collisions, missed pockets even, and a parallel of ideas combining, reflecting. Metric modulation was mentioned. This was bigger, more symphonic and my favourite of the afternoon, but all were intellectually satisfying and musically investigative. Four composers appearing from the low lights of coffee and cards. Interesting.