Here's a gift for the musos amongst us: an index of tunes from several well known jazz fake books. The books are -

Versions are in Excel (.xls) and tab delimited (.txt) formats. To download in Windows, right click on the link, and select "Save link as...".

http://canberrajazz.net
Posted by Eric Pozza at 5:52 pm No comments:

ArtSound FM 92.7 is Canberra's local arts station, playing lots of good music, passing on info on local arts events, etc. ArtSound is moving its premises in the very near future. The new premises are located next to the entrace to Manuka Pool, and are shared with PhotoAccess, another renowned Canberra arts institution.

The Open Day will be held 11am-4pm, Saturday, 3 December. Apparently there will be performing artists, tours of the new facilities, etc. ArtSound are asking for people to ring so they can cater. Sounds a great opportunity to support this excellent local resource.

http://www.artsoundfm.asn.au/
Posted by Eric Pozza at 4:25 pm No comments:

Email ThisBlogThis!Share to TwitterShare to FacebookShare to Pinterest
Labels: ArtSound

I've started up a group at YahooGroups. Everyone interested in Jazz in Canberra is invited to join. So what does a YahooGroup do? It's a mailing list system with archive (you email to the group address, and it bounces to all members). But as well as that, you can chat, share documents and pics and more. I plan to set up a database of local jazz musicians, and possibly use the calendar facility for musos to advertise jazz gigs around Canberra. Thanks to YahooGroups for this excellent free service.

You have to be a member of YahooGroups to join. It's easy and free. Start by sending an subscription email to - 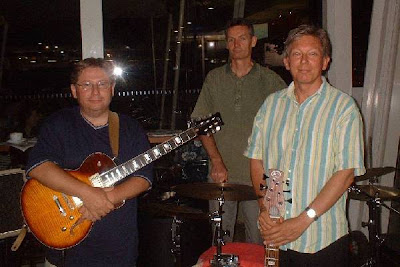 Time for a plug for my own band. Project bis play at Cafe Gaudi in Woden, 6-9pm, Fri 18 Nov, and each second Friday therafter. Cafe Gaudi is at the western entrance to the Woden Shopping Centre. Project bis are Mike Mamontov (guitar), Scott Young (drums) and Eric Pozza (bass).
Posted by Eric Pozza at 4:52 pm No comments: 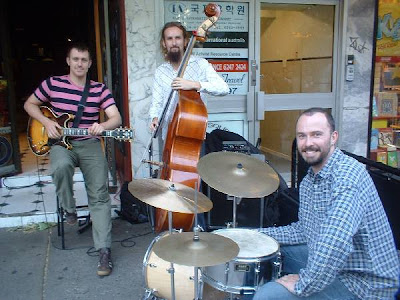 The Coverts were also playing at the CJF. Again James Luke (bass) and Chris Thwaite (drums), but this time with Charlie Meadows (guitar). Standard repertoire, plenty of interesting and capable solos. Entertainment for the wine tasting public, outside Red Gecko. BTW, great name for a band.
Posted by Eric Pozza at 4:47 pm No comments: 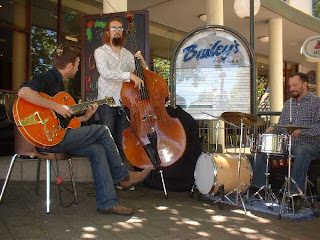 Barney McAll was one of the two out-of-town stars at the CJF. BMcA is past winner of the Wangaratta Piano performance prize, long-time sideman for Vince Jones, and now resident in New York. He's touring Australia with a local band, performing music from his recent CD. The CD was influenced by Barney's several visits to Cuba, and especially by music he heard there at a ceremony dedicated to the Yoruba goddess Yemaya. He recorded the rhythm tracks in Cuba, then added further tracks in NY. The Australian band was very capable, providing an intense latin experience unlike anything I have heard before. The band is made up of: Barney McAll piano, Jamie Oehlers tenor sax, Shannon Barnett trombone, Nashua Lee guitar, Phillip Rex bass, Craig Simon drums and Javier Fredes percussion. Loud, involving and complex. Good readers only should apply!
Posted by Eric Pozza at 4:35 pm No comments: 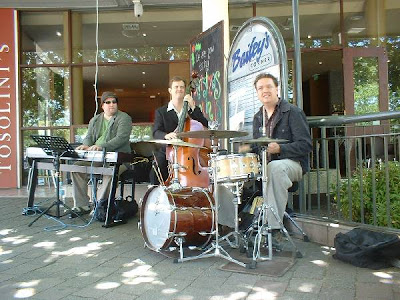 The Wayne Kelly Trio played at Tossolini's yesterday for the Canberra Jazz Festival. They tell me they have just finished recording a CD. The performance was all original tunes which were obviously well rehearsed for the recording. I found it excellent modern jazz, played in a quiet and relaxed fashion but with great intensity, and with interesting and well-defined lines. Wayne Kelly piano, Ben O'Loghlin bass and Mark Sutton drums. I also like the historical context, eg, post-bop heads of triplets and flat fifths. Paraphrasing Newton, we stand on the shoulders of giants. Congratulations on a terrific performance. Apparently the CD is out in the new year. They play at Hippo's on 30 Nov.

Addendum. I saw them a second time today. My guess is the richness comes from lots of complex extended chords on piano make for the modern sound. But plenty of post-bop lines still in the solos and heads. Great stuff.
Posted by Eric Pozza at 9:37 am No comments: