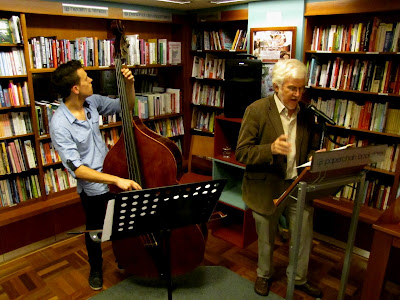 The words we hear in jazz are much loved but they can be of little import: mostly love songs from the American songbook. On Sunday, I heard Geoff Page reading poetry about jazz, and he noted that “the lines are saccharine, of course, / but irresistible … where one could rhyme youth with sooth”. I like this and it’s so true, as were his other words. Someone mentioned that they liked Geoff’s poetry because it’s easy to understand. This certainly was: daily language, direct, short, unforced but still compelling, especially if you love jazz. Geoff obviously does and his words have depth. It’s not just Coltrane and Miles who appear in his stories, but Booker Ervin and Bobby Timmons and “Stewie Spears, the Sydney drummer, / whom no one much remembers now”. There’s real history here. There’s also a resigned annoyance at times, when Geoff despairs for art subdued by triviality. I was amused that I could guess the bar where the aficionado is surrounded by the shrieking cocktail-baited love market and also that this interfering conversation was in C#. It’s an engrossing passion that he writes of. He recollects the “brittle arguments of Miles / and all the psalms of John Coltrane” amongst the “rough percussion of the grinder” in a coffee bar. (Poets love coffee bars and Geoff seems no different). He notes “the running of the alto sax, / the high-jump of a trumpet”. Geoff plays the vibes and I understood his words well when he recounts that he “snatched / a phrase / and took / it home / to work on but / by dawn / it was / dead”. I learnt something from his neat summary of jazz theory that is his Parable in 4/4 and I’m still pondering this quote: “Minor third without the third / as T. Monk used to say”. Music is truly a hard task master. 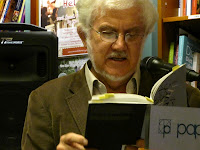 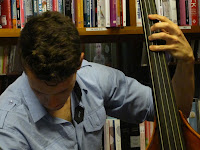 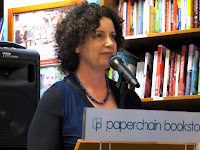 Geoff was accompanied by bassist Alex Boneham. He’s a wonderful player and ably strong and commanding for this role. It’s an unusually exposed role for a bassist, demanding rhythm but also melody and harmony and responsiveness to lyrics. Alex did a great job. There were walks, there were grooves, there were blues and standards, Yesterdays and So what. But there was also melody and responsive dissonance and chromatics like the flattened notes that accompanied Geoff’s “before his girlfriend guns him down”. This was strong and edgy acoustic tone and inventive harmonic lines and it was all from big ears. The chart for the gig was just a few sparse written instructions although Alex admitted borrowing a few ideas from Eric Ajaye’s previous recordings with Geoff. That’s how art develops, of course. Congratulations to Geoff and Alex and also to Miriam Zolin of Extempore, the committed publisher who provides so much support to modern jazz in Melbourne and Australia.

Geoff Page read his jazz poetry to the accompaniment of Alex Boneham (bass) at the Paperchain Bookshop in Manuka. Miriam Zolin introduced the set. The poems were from A sudden sentence in the air : jazz poems by Geoff Page. Melbourne: Extempore, 2011.