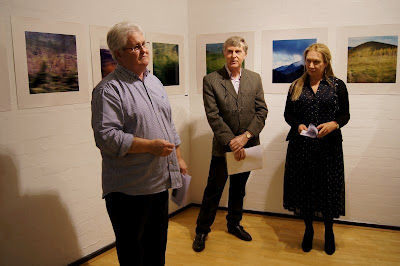 A launch is the party end of a visual arts event and I seldom get to them. But I did get to this launch, at PhotoAccess, for my mate Brian Jones and a colleague Jane Burton Taylor. I won’t comment on the wine and cheese although it was enjoyed and it’s integral to any launch.

Brian is an active photographer around town and (I think) past-president of the Canberra Photographic Society. His exhibition was a study of Bower birds. I’d heard of Brian and Jill’s backyard bower birds over several dinners and here they were – in two series and a movie. One series was called Apprenticeship and comprised 13 photos of a male bowerbird as it learns, over 6 years, to build a bower. The other series of 8 showed the change of a male from dusky child to the richly feathered black beauty of maturity. All for the approval of the female and the quick mating ritual. Ain’t nature wonderful. Brian has also delved into film, using the same multipurpose digital camera, and I actually preferred this. (I’ve recently felt a similar preference for short film clips that I’ve taken at jazz gigs over pics, and it’s a surprise to me). Both photos and movie were technically satisfying, impressively sharp and informing in a documentary sense. I certainly learnt lots about our famed Australian bower birds.

Jane presented 21 pics in a series called Earth. These were photos of countryside, taken with foreground movement and distant, still focus, and all from a visit to Sicily. There were two that took my fancy. One had what seemed a surreal background of rolling hills with colour drained out through atmospherics that appeared every bit like a strange sky that reached to the edges of the image. The other was just a superbly structured image of trees, with one impressive example nicely centred to lower-left and foreground in classic rules-of-thirds balance.

And, yeah, the wine and cheese were nice and the dog was cheery. Brian Jones and Jane Burton Taylor launched a photographic exhibition at PhotoAccess.
Posted by Eric Pozza at 9:13 pm