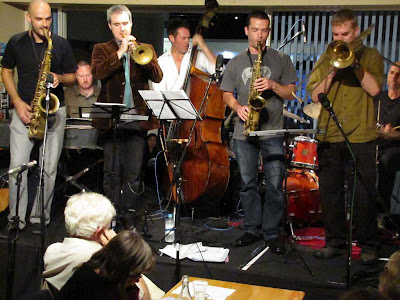 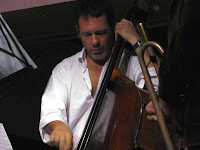 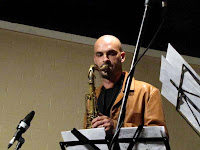 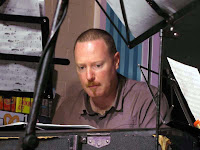 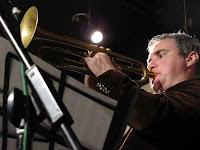 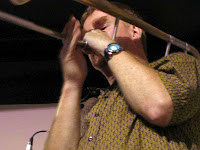 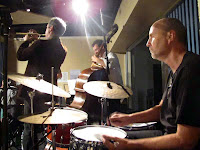 The Sea is Jonathan Zwartz’s recent album. It was also the first tune when Jonathan Zwartz presented his sextet at the Gods. I’d been awaiting this concert. Jonathon is a wonderful bassist who has impressed whenever I’ve seen him; playing a strong and muscular bass with John Mackey at Jazz Uncovered 2010 and an insightful and tender one with Tina Harrod sometime earlier. His performance of The Sea got great reviews at Wangaratta, so this gig was anticipated. The Sea was the first tune. Mystical and minimal with (German) bowed double bass setting a gentle ostinato background and the horns blowing and squealing and seagull wheeling up front. I looked around and people were mesmerised. So was I. Somewhat to my surprise it didn’t stay this way, despite John Shand’s mentions of minimalism. There were just six other tunes over the two sets but they were generously long. Several were slow with plaintive melodies, but there were also grooves that were rich and steady (one reminded me of Herbie’s Headhunters) and a finale that channelled Mingus with an intensity and ornery-ness that was the closest I’ve come to the great man. There was minimalism but more than that there was solidity and presence and sheer capability that oozed from a mature group of musicians at the top of their craft. The way a groove would sit for a few seconds, busy with lots happening but also supremely relaxed, before the simplest of lines stated a theme for a solo. This is what masters do and this was masterful. James Greening entered his solo that way, and I was thinking of him. Simple statements that became clear solos, developing and moving, all structured with visually lyrical thought, and being James, with humour and quirkiness and audience contact. Phil Slater was different in style: a formal presence but with rabid speed flying over structures with virtuosity and density and a pitch that was slippery and precarious, colouring the tune with consonance and dissonance alike. Richard Maegraith was initially the considered search: a few full tones seeking perfect notes to follow, slow and intent, especially on the bass clarinet. But at other times, often on tenor, he was most harmonically challenging, breaking into dissonant sheets of notes. Matt McMahon was clear concentration, his Rhodes piano fitting perfectly in this sound, calmly concentrated, defining and enriching grooves when comping and, in solos, wildly moving themes and bars and harmonies with uncluttered but incongruous lines. He’s a unique voice, intensely demanding but quizzically satisfying. As the night wore on, I was closer to Hamish Stewart and noting his easy and flowing but busy style. His grooves were to die for, relaxed but full and interesting. Lovely. And Jonathan. He was leader and composer of most tunes: soulful tunes with grooves that were settled, strong and rich. There were some smiles later in the night, but plenty of strained concentration and Mingus-like supportive yelps and grunts. He played two strong solos, but the night was really moody grooves, richly embellished but reliably steady. The quieter tunes were The Sea, a tone picture with wailing gulls and sea breezes, and two slow but melodic pieces: Epic and the touching Icelandic which told of the experience of a stroke. Icelandic was memorable for some delicious timing and gentle hits that sat in time so correctly. Curtis was an obvious dedication to soul-singer Curtis Mayfield and highlighted one stylistic influence. Science experiment was a blowing tune with Headhunters grooves. The Mingus tune was Wednesday Night Prayer Meeting, a boisterous blues that finished off the night. Jonathon invited local student Matt Handel to sit in on alto for this one. A great and memorable concert. Jonathan Zwartz (bass) led a sextet with James Greening (trombone), Richard Maegraith (bass clarinet, tenor sax), Phil Slater (trumpet), Matt McMahon (Rhodes) and Hamish Stuart (drums). Matt Handel (alto sax) sat in for the last tune.