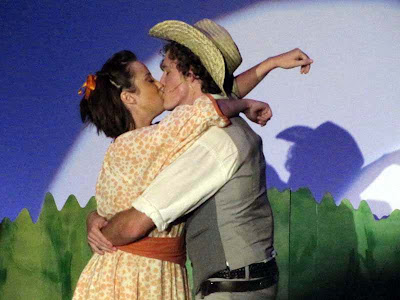 O…klahoma where the da da da-da-da-da daaaa. That was about all I knew about the musical, except a discussion in recent weeks about the origin of the word “dashboard” that quoted a line from The surrey with the fringe on top, a song from, you guessed it, Oklahoma! The surrey was obviously a horse-drawn carriage, but I wasn’t too clear in my mind about that either. Oklahoma! was the first musical of Rodgers and Hammerstein and it was a great success on Broadway when released in 1943 running for a season of 2,212 performances. It’s a story of a central romance (Curly and Laurey) and a secondary comic romance (Ado Annie and Will Parker) set in early 20th century Oklahoma. There’s a subtheme of farmers versus cowpokes, a touch of Persian derogation (a wiley plot by Ali Hakim to avoid a shotgun marriage to girl-who-can’t-say-no Ado Annie), a good bit of dance including a long dream scene and a dramatic plot involving a misfit farm-worker (Jud Fry). The story is light, mainly centered on sexual politics around the box-social where males lasciviously donate to the school to win the hampers prepared by their favourites). The dramatic story centres on Jud who pines for Laurie and fights with Curley for her. This drama was out-of-place for me but the play obviously needed something more substantial to get through the 2 ½ hours. I found Jud’s death at the hand of cleanskin Curley and subsequent town-meeting judgement of “not guilty” that allowed the lovers to catch the train due 20 minutes was difficult. I expect the US is much more aware of murder and they also have strange rites that take local democracy to a level that’s absurd to our Australian sensibilities. 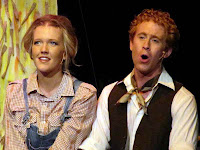 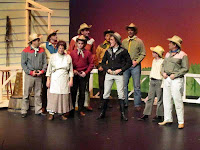 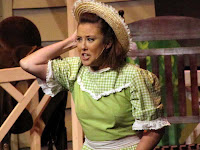 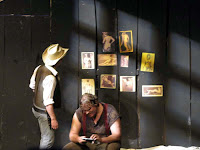 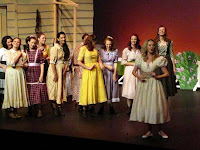 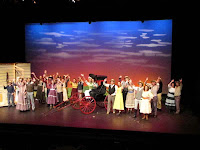 But how were the performances? I loved it. It’s an amateur cast and orchestra and they did it bloody well. Not like you’d expect on Broadway, of course, but very, very well done. Accomplished dance; decent voices; easy acting. I particularly liked Curley’s voice, but the other main characters were very good and the crowd scenes with harmonies were also harmonious. Ado Annie’s presence was madly effective as the flitter-brained floozy. The stage set was decent, and the cowboys’ thumbs in belts and womanly presence were effective and Aunt Eller’s presence was sensible and mature and held the story and the characters together. The accents stood out a little, but it was all a bit of a joke anyway. And the orchestra. Leisa Keen was the musical director. Sally Greenaway was to be the conductor, but was sick. The band included several jazz school graduates from these pages. The music was comfortable from the first bars of the overtures: well intoned and relaxed, although I did feel the chops were tiring by the end. And the instrumentation interested me, given a sound that was surprisingly full although obviously not orchestral. The music is light, but there are a few memorable tunes: Oh what a beautiful morning, The surrey with the fringe on top, I cain’t say no, People will say we’re in love, and of course the eponymous title song.

I was also interested by the associated history. Oklahoma! is set in early 1900s. Oklahoma (the state) was only declared a state in 1907, after it use in previous decades for relocation of Native American populations and subsequent ranching. It was also the dust bowl of 1930s fame.

Glad you enjoyed the show! Wy and I had a blast conducting it!