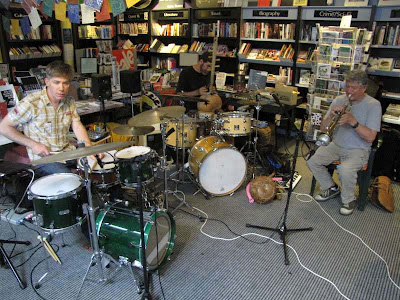 Peon. It’s an obscure word. I had to look it up: a landless labourer doing dull or heavy work, especially in Spanish America. There’s a certain dignity in serfdom, but even so it’s a strange name to give to a band. But for a double drummer outfit experimenting with electronica, maybe it fits. It’s certainly not the commonplace of disco or bar and the addition of percussion and trumpet didn’t make it much more amenable to unready ears. But it was fascinating and involving, especially when you closed your eyes and let the layers of rhythm pass over you. This is challenging stuff, but I felt plenty of links to other musics. The music flowed in and out, so each set was one continuous piece, but the music and themes came, grew and faded, to await another. I loved the African talking drums and the complex polyrhythms that were common throughout the night. I still heard this as essentially drum music, so with two drummers the polyrhythms were not unexpected. I especially remember one time with two snares that passed in the night, one snapping slightly more frequently than the other, so they came together then parted. But there are layers of percussion here, contrasting or complimenting or referencing and always a rich aural tapestry. I asked Sam if the music was free. No, there’s a structure although with plenty of freedom to move. One structure was a bass-like line randomly altered and repeated by a PC program, so the leader in this case was a random number generator in a laptop. The PC did other work on voice and trumpet that were miked and repeated and bent and extended to unhuman glissandi flying to the sky. Miro added an additional melodic element to the music that I really liked. The muted trumpet was a joy, with rapid tonguing bouncing against the drumbeats, enlivening with intervals that implied constantly changing harmonies. Ronny explored some less sophisticated melodies on a little melodica keyboard, played some other effects and the drums, of course, but also an African instrument (ngoni?) that once more set the scene at the heart of the African drumming tradition. Sam mostly drummed, but also used PC modulation on voice and Miro’s trumpet to mystical effect and he had programmed the pieces. Electronica is part of our aural life since Dr Who but still seems limited in musical application, more an effect than a music. Despite the Moog experiments in conservatories in the ‘60s, and pop electronica that mostly does same-old-same-old with electronic tones, it still seems somewhat unexplored. This was an engrossing outing that successfully mixed digital tones and earthy drums that rose and fell and enveloped any listener who was ready to succumb. Peon, serf, perhaps, but walking down the street by bars and mainstream nightlife after, I wondered if maybe it’s the emperor who has no clothes. 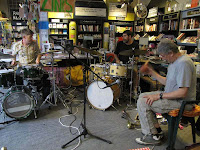 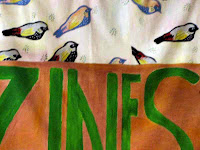 Peon are Sam Price (drums, laptop, synths, voice) and Ronny Ferella (drums, melodica, ngoni, analogue effects) and Miroslav Bukovsky (trumpet, percussion) sat in for the Canberra performances, at the Loft and this one at Smiths Alternative Bookshop. Visually Smith’s is a busy venue, but it’s got a nicely damped sound.