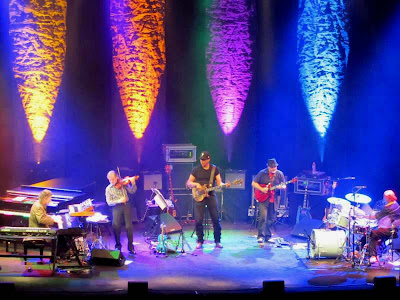 Chick Corea can do no wrong in my book, at least as regards music. This guy is a natural. He covers the waterfront: records Mozart and plays acoustic and electric jazz with conviction and imagination and immense skills and writes melodies to die for and has recorded some of my favourite piano trio music. I was looking forward to the new Return to Forever (RTF) at the Opera House although I was just a bit wary of the electric, unrelenting nature of jazz-rock with its hype and bluster and meganotes. But I had it wrong. The playing was beautifully relaxed, despite the most contorted unison lines, and the tunes themselves were surprisingly satisfying on the revisit. I had listened to RTF a lot in the past and not much of late, but the lines were like friends even if I couldn’t match many titles to tunes. I felt it was like electric chamber jazz: complex and precise variations on motifs that moved through a fabulously capable band with nicely contained spaces for solos. I’d heard Chick Corea in Adelaide in the Musicmagic era and remembered a long and hard-working concert. They are older now, but still working hard: this was 2.5 hours over two sets with no support act. Maybe they are flagging just a bit - I noticed a spot in the second set where I felt they were doing the rounds - but this was a show full of energy and invention and great skills. 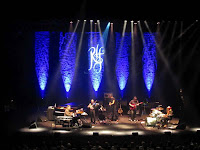 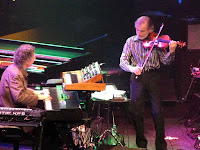 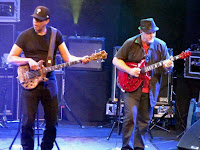 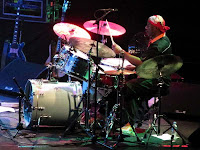 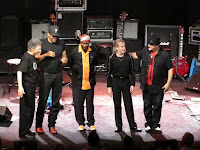 Chick’s just wonderful. Every solo has purpose and development and his lines are to die for, always beautifully melodic and inevitably correct. And he was all eyes for the others, swapping licks with Jean-Luc and Frank, and setting the strongest of ostinatos that were nuclear-propelled. Jean-Luc Ponty was a diminutive character, especially next to the giant Stanley Clarke, but a master of his instrument. Beautiful and simply correct lines that wasted no notes and sang with perfect intonation, and written melodies that sat languidly like a summer Sunday afternoon lunch, just so easy and yet precise. I was also hanging out to hear local boy Frank and famed bassist Stanley. Frank was a wonder: I thought afterward how important his role was. There was no flash here, just immense solidity, the most lithe of solo lines that spoke with brash, fat guitar tone and ended with light-speed sweeps or delightful little upturns. These were spectacular solos of purpose and development and smooth skills. I thought they worked best on the electric – the style didn’t seem to cross so easily to the steel-string acoustic. But the sound was disappointing. His guitar was fat and even-sounding and I was not the only one to miss many lines of solo. Clarity was better on acoustic but still very poor for this level in such a venue. In fact, the whole band seemed a bit mushy, badly so in the first few tunes (I’ve heard this before at the Opera House and it’s disappointing) and to some degree ongoing with the louder electric stuff. But the thing that really got me about Frank was his back-line solidity: all those perfectly played unison lines that sat so perfectly, unnoticed but essential. This was a rock solid and superbly professional and composed performance. Stanley was his normal blatheringly fast player. I was a bit disappointed. Lots of hammering solos lines at megaspeed that were excitement personified, showy hands in the air and rock star swagger and interestingly the central spot on the stage. It was a massive display of technique but the solos just seemed to go nowhere: all brash and flash. There was some lovely playing in the second half on double bass - still fast, but some fabulous thumb position work across the neck with melody and harmonic movements - but too often that resort to the mega-pluck. It’s not unimpressive, but that’s what it is. Stanley has just won a Grammy and has 55 films to his credit (so said Chick) but I didn’t hear the lyricism that he must display as such a successful composer. Maybe it’s just Stanley in his guise as RTF mega-bass, but the band’s encore, Schooldays, was to par. Compared to the complexity and inventiveness of Chick’s charts, Schooldays is a schoolboy rocker’s romp. I guess that’s all it’s meant to be, but it does little for me despite the admittedly catchy melody. Lenny White finished the lineup. He didn’t make much of an impression on me. Capable and correct but mostly pretty straight jazz-rock grooves and a few fills. Not wrong but not particularly memorable either. He did take a short solo at the end that was nice but there wasn’t much of it. My mate Asanka wondered about the tom mix; perhaps we were missing detail.

It was the relaxed but virtuosic performance of fabulously rich and melodic charts that made it for me. Along with Weather Report, this is probably as far as jazz-rock goes and it was a very satisfying performance. Return to Forever played at the Sydney Opera House. The new RTF comprises Chick Corea (keyboards), Jean-Luc Ponty (violin), Frank Gambale (guitar), Stanley Clarke (electric, acoustic bass) and Lenny White (drums).
Posted by Eric Pozza at 12:57 pm

This was a concert when one should reach for the Thesaurus in terms of praise of the musical ability and artistry exhibited on stage.

it was a great night. However I must admit that this was the first time I had seen a stadium style show in the concert hall. It would have been enhanced by turning the volume down bait, but over all I agree with you.

Anthony, Thanks for the comments. Yes, it was loud. Earplugs required.

Good review, Eric. Insightful and to the point. I just discovered your blog while searching for a usable photo for my own blog jazzjazzersjazzing, and found one. I'll do the credit as Eric Pozza @ Canberra Jazz Blog. Keep up the good work.

Carl, Thanks. I'm looking at your blog and lots to learn from it. Well done. Eric