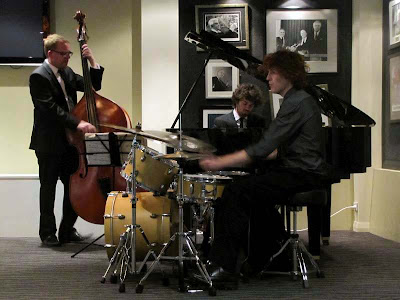 It was just a quick visit to the National Press Club for one set. Andy Butler was leading a piano trio with Phill Jenkins and Aidan Lowe. The bar was pretty quiet but there’s an acoustic grand piano so the sound is as it should be, even if it has to occasionally fight with the jangling musak of the pokies. They played standards and did a wonderful job. Andy was calm but inventive, moving away from obvious chordal statements, holding template lines that modulated with harmonic movements. Phill held the bass end admirably. His volume was too low at times, but his playing was nicely correct and in the solid lower positions. (I’m working on my right hand double bass pizzicato technique and that was the main reason for this visit. FYI, it’s a very physical but loose technique and Phill had it down nicely). Aidan moved through colours of cymbals to jazz grooves, mostly with brushes, as I remember. It was a lovely range of standards done with calm invention in a piano bar environment. Andy Butler (piano) led a trio with Phill Jenkins (bass) and Aidan Lowe (drums).
Posted by Eric Pozza at 1:44 pm