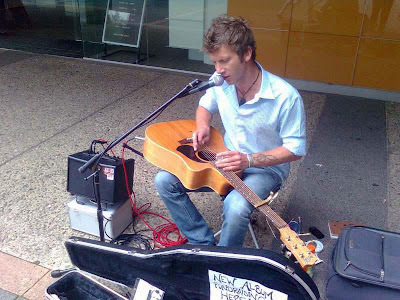 First off, I was attracted by the lazy, swampy grooves that emanated as his right hand pick and left hand slide easily coaxed the guitar sitting in his lap. A blend of melody and comping that was simple but right, as should be the way with blues. It was a steamy day, so the voice fit the down south mood: languid and unforced with an air of simple honesty. There’s a subdued acceptance in blues voices that makes them authentic. Rockers may play the blues but they miss that feel. This voice felt right to me. I wasn’t surprised to find the album on sale was titled “Live in Ireland”. The Irish have often been likened to slaves in their own way. The singer was Robert Owen Campbell (admittedly it’s a Scottish name, but the Scots have a similar narrative). He was busking at the Philip Town Square. He plays at the National Press Club, Soul Bar, Phoenix Bar. He sometimes plays with Mick Elderfield who I’ve heard busking jazz sax in this square. Blues and jazz: same roots.
Posted by Eric Pozza at 2:46 pm