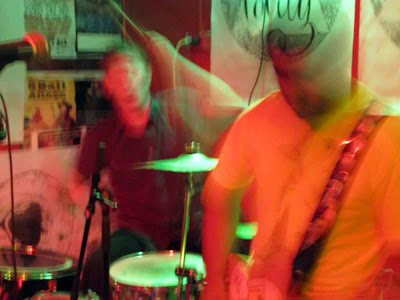 It’s not a thing of melody or even harmony, although there’s some minimal harmony there, and although there are times of immense rhythmic energy, there are others where rhythm is in repose. I don’t find Spartak and their like an intellectual music, more a music that guts the senses and pummels the emotions: intensely present and demanding of a response. Spartak’s gig yesterday at the Phoenix was wonderfully satisfying. I think it’s mood that this music emanates, with segments that are dreamy and others explosive. 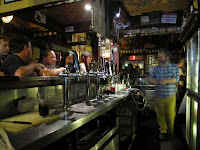 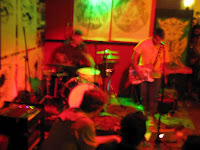 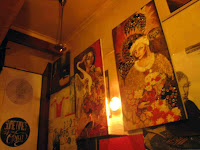 Evan was in fabulous form. The drums were loud and heavy and big sounding in rock style rather than submissive swing and he was writhing in his seat as he threw forth the most truncated syncopations, hugely varied in rhythm and tone and, well, creative. I was aghast with these drums. Powered, precise, full and rounded and profusely varied. Taking the more cerebral drones from Shoeb’s processed guitar or voice or clarinet and exploding rhythmic possibilities. This was loud and it fitted, although it would have benefited from a clearer PA to serve the sound. I lost the detail of Shoeb’s lava-like structures as they flowed glutinously through the soundscapes. I noticed some simple repeated minor thirds, but the PA didn’t do justice to the detail, and the essence of this is the detail. The duo played a single set of 30 minutes, moving in and out through themes like Peon the week before. This was one set of Travis Heinrich’s mini festival, “Hey Dad, can you pick me up from Josh’s, otherwise it’s like two buses”. Being a parent to this university-aged group I see it from the other side, but the odd title rings true just the same. Nice to visit the Phoenix, too. It’s delightfully bohemian-bedraggled with a pleasant and intelligent clientelle. The festival was mostly indie, JJJ-style but the audience recognised and responded to this free, improvised music. So both audience and band impressed. Short but sweet all round.

PS. Thanks to Shoeb for this explanatory info below. BTW, Spartak are soon heading off to play concerts in Kuala Lumpur, Singapore and Japan. Best of luck from CJ. In the meantime, you can hear them on 17 March at Urbancity, a mixed arts festival around Canberra over several days in March.

"I like what you wrote about our music being just really an intellectual music but something more visceral and physical - that's how we approach the improvisations we do and I think it helps making it a bit more 'accessible' though of course, I think the music itself has to mean something to the listener to really understand it, as with most free improvised music.

"Also, it's good that you noted that a lot of the sonic detail wasn't clear through the PA. Evan and I feel that we play louder and 'heavier' in those situations, even if it's still very washed out. I assume it adds to the physical nature of the sound but when we perform in, say, a gallery space, the music becomes a little bit more clear and spacious, maybe more delicate too.

"Re my sounds, I am essentially running my electric guitar through various effects pedals with distortions and looping functions directly into the laptop where I also have some processing tools and can set up loops, mainly as layers. Melodically, I was building up layers of guitar notes and chords, both clean plucked and without the string attack so I had a base before I started playing any sort of clear chord progression. During the middle section, I used the guitar as a soundboard by using the pickups to amplify the dictaphone with a field recording of trains I took in Bangladesh and also amplified the music box to have a melodic point of difference.

"The harmonica mic I had was also going into the laptop, so I could do some real-time processing with either the vocal or the clarinet so it has a more texturally quality.

"Evan was running loops and sounds of his laptop at various points during the performance though he also does some live processing with a microphone on the drum kit which adds a nice texture to the wall of sound."

Lightly edited email from Shoeb Ahmad
Posted by Eric Pozza at 11:41 am