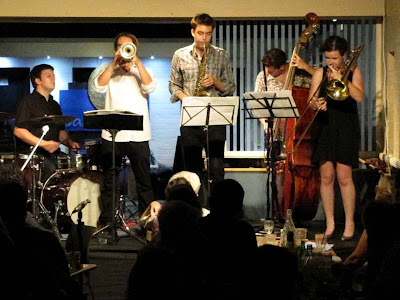 I thought I had the Vampires sorted. Dub and reggae rhythms with highly syncopated melodies and some fairly short but very sweet and capable jazz solos. Despite their name and a relaxed readiness to settle on a groove and several clear vamps against drums solos, I didn’t particularly feel the Vamp-ires’ vamps defined the band. This was more a broad contemporary crossover. An all-ages band (tongue-in-cheek alert) appealing to jazz aficionados along with a pub set. There’s a lot of this around, partly to earn cash and partly to merge catholic interests of creative musicians into their more esoteric jazz studies. Nothing new, really: Diz crossed to latin; Miles crossed to rock; Herbie crossed to funk; Bad Plus crossed to grunge. Contemporary jazz is a melange and all the better for it. So I’d set them in the reggae camp, but there were the delicious trad-style collective solos, a fairly free outing during the second set and to top it off, a clear rock feel to finish. I’m chastened and promising not to put bands in boxes in future, but I’m elated. Great stuff and eminently entertaining and intellectually satisfying to boot. 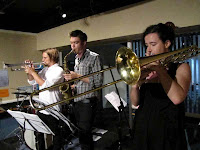 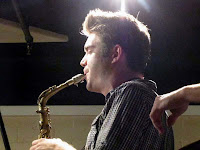 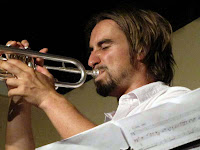 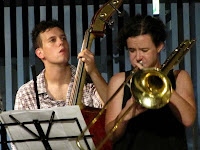 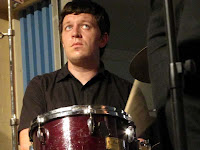 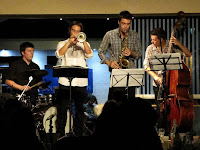 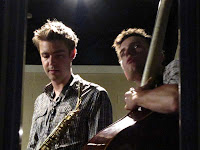 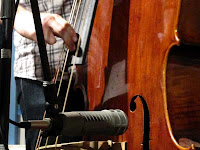 The Vampires are a quartet of alto and trumpet fronting bass and drums but this outing added a Melbourne mate, Shannon Barnett, on trombone. So the front line was that much richer in harmonies and solos and tonal and conceptual contrasts. Trumpeter Nick Garbett was a wonder, playing with embrochure and squeels and squeaks, or blaring with rapid-fire lines that flared easily over changing chords. He was a finalist in the recent Australian Jazz Award at Wangaratta for brass, so I’m not the only one to recognise these skills. I’d caught Shannon Barnett at Wang but not in so intimate a setting, and was looking forward to this gig. She didn’t disappoint. Her solos were authoritative and nicely developed, with clearly-imagined melodic lines, often as calls-and-responses, and displaying intervallic and rhythmic intelligence and rich with dynamics. Jeremy was on alto for the night, less proud and bell-like than the brass, but equally inventive and humanising the harmonies with the more carnal reed tone. This was modern jazz dissonance meets pop sensibility: medium tempo, mobile, constant, often atonal. Alex 1, Masso, was all eyes and ears, quiet and admirably controlled for a drummer, but constantly aware of his surroundings and playful with those out-of-synch reggae beats. Some deliciously odd little fills caught my attention as did several solos played against front line vamps. But as bassist, it’s no surprise that Alex 2, Boneham, was the vamp master of the night, holding some very demanding bass ostinatos. I was surprised that his bass was so present given it was not amplified. It was miked through the PA, but that had little effect where I was sitting and the bass was easily heard for solos and accompaniment. Some nice solos, too, reaching right up high then easily moving the length of the fingerboard with pleasant and talkative ideas. All this over original compositions from Nick and Jeremy. Lots of syncopation in the heads; some extra bars thrown in here or there; some vamps or easy chord changes; some fairly short spaces for solos. There was a love song, and a doleful tune for Haiti, and a playful song for a dancing mother, and a few that were just clever and attractive, with their mostly off-beat reggae grooves.

Sydney met Melbourne via Jamaica with a touch of US and it was great entertainment and much satisfaction. A very promising start to another season of jazz at the Gods. The Vampires are Jeremy Rose (alto sax), Nick Garbett (trumpet), Alex Boneham (bass) and Alex Masso (drums) and good mate Shannon Barnett (trombone) sat in for the night.