Ave Maria is close enough. At least the first half was dedicated to Pope John Paul II’s particular devotion: Mary, mother of Jesus. And we were in the large reverberant space that is St Christopher’s (Catholic) Cathedral in Manuka to hear SCUNA’s concert for the run up to Easter. It was a wonderful presentation of some very beautiful sacred music. 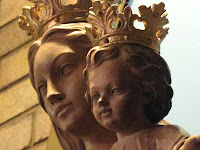 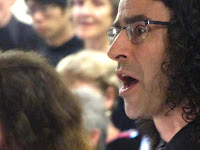 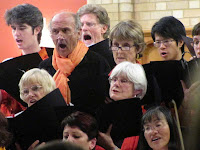 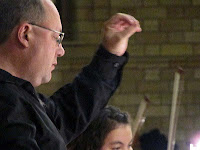 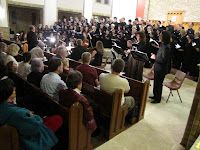 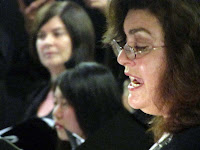 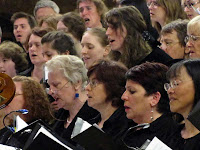 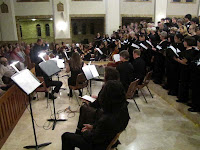 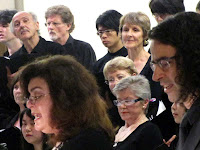 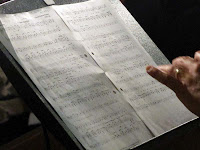 We are a diverse and secular culture now (although our newer religions are often more strident in response) so it’s no surprise that most of the program was from a much earlier time. Pergolesi’s Stabat Mater was composed in 1736 to the words of a 13th Century Franciscan, Jacopone da Todi. Vivaldi’s Gloria (the well known one, RV 589) is from 1715. But there was one modern work: Górecki’s Totus Tuus. Polish Catholic Górecki wrote this for a visit of the Polish Pope, JPII, to his homeland in 1987. It’s an a capella work and was performed with the choir starting at the back of the cathedral and walking forward slowly to finish at the altar. It’s a simple work, simple lines moving together and with much repetition, but quite stunning in its holy minimalism. It was also interesting to hear the individual voices as they passed along the aisle: some strong, some less so. But in toto, a stunning work that was particularly popular on the night.

Pergolesi’s Stabat Mater followed. I know this from a Hyperion recording we have at home, sung by two voices, soprano and countertenor, and with 7 musicians (strings and continuo). The original was written for male soprano (not many of them these days) and male alto. I was wondering how SCUNA would perform it. This version was orchestrated for SATB choir with perhaps half of the 12 numbers sung by an individual voice or two voices in harmony. I missed the constant harmonies of the solo voices on the recorded version, but a choir has its own beauty and power. This was a large choir and easily filled the space although I’m not sure I caught all the harmonies, perhaps due to rich reverb. But the reverb particularly suited the solo voices. Tobias Cole was incredibly forceful and well controlled and he was theatrical as he has been every time I’ve seen him. Louse Page’s is not a voice to crack crystal. I hear her as more rich and dark which is probably more true to the original intent. I also noticed the very capable continuo that seemed to hold the musicians together. This was a beautiful and touching performance of delicate and somewhat courtly music with a dolorous theme. Lovely.

Last was Vivaldi’s Gloria. This is well known although not by me but I recognised a few passages. I heard this as more majestic and joyous than the dolorous Stabat Mater, although there are numbers here that also speak to the crucifixion. The instruments were expanded with trumpet and oboe for the satisfyingly baroque sound that I expected of Vivaldi. It amuses me how few words are in these pieces, but they are so beautifully arranged (and in obscure latin) that we hardly notice. What huge joy is in Gloria in Excelsis Deo and what deep historical resonance is in “You who takes aware the sins of the world, have mercy on us”. This is Christian liturgy at its most powerful and, faithful or not, you have to have a heart of stone not to be affected by the glory and power and history of it all.

Which reminds me of a visit to the Vatican museums. It’s a wonder how powerful and honest is the religious art of Catholic mediaeval Europe, but visit the Vatican’s museum of modern art and it’s weak and affected and strained. So it was with unexpected that I so enjoyed the Totus Tuus. A modern religious work that works. Surprising and satisfying. This was a wonderful concert in the lead up to Easter, whatever your beliefs or non-beliefs.