Of a martyred Roman and her slave 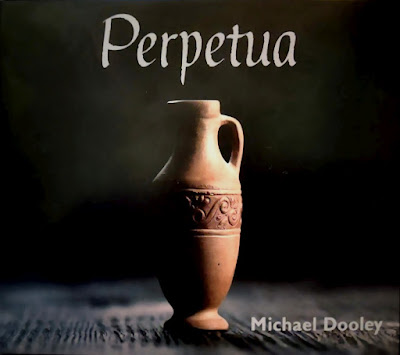 I've known Mike for quite a few years and it seems his compositional daring and chops just keep expanding so even though I was overwhelmed to think a mate had written an oratorio, I was not really surprised.   And I've heard his music.  The jazz is melodic with nice chords and satisfyingly witty lyrics.  Then his classical.  He put out a few albums of classical in the style of the greats, Mozart and Bach and the rest.  I first heard workings at our digs for a Moruya Jazz Fest.  Then I played in the NCO behind his piano concerto.  Now this.  An oratorio.  Think Messiah and the like.  Big works of song and choir and orchestration.  They presented religious themes at times when secular themes were not acceptable or suitable for performance in church.  It's a big work.  I was impressed by Mike, again.  It's big and costly to stage, so Mike presented a few public iterations of a video of the recording sessions.  21 or so players, from CSO and Coro and the cream of local vocal soloists; 9 hours recording over 3 days at Canberra Girls Grammar School concert hall, acoustically treated if still with some residual noise issues; 35-or-so mics.  And a religious story, of saints and martyrs from ~200CE, the Roman noblewoman Perpetua and Felicity, perhaps her servant, and several other free men martyred for their Christian faith.  Mike used her first person narrative, some Biblical quotes and some Latin from Ambrose for the text.  The music was variously influenced: Mike suggested baroque and early music and film music (he has also composed for several films).  I melted with the first introductory piece with a theme that recurs to end and sometimes during.  I was enamoured by the vocals, the clear soprano of Emma Griffiths as Perpetua, but her soloist offsiders were similarly impressive, Veronica Thwaites-Brown and Dan Walker and Andrew Fysh.  All hyper-known names in this field in Canberra.  They were chorally accompanied on some tunes by Coro, a blissful vocal collection of harmonists, and instrumentally supported by a string of CSO and related Canberra players.  Bassist Kyle was in line of sight with Emma/Perpetua so I got so watch him often, but there were lots of familiar faces to observe.  Suffice to say the music and singing really was of wonderful quality and often-enough spine tingling.  The whole work is one CD length, ~1 hour, 24 pieces.  Some were short and sweet, a father's imploring or a mother's lamenting or a martyr's injuries or a dream of Heaven and angels or a maid's protection given birth.  Interestingly, there are two key women and both have children here: Perpetua is 22 and breast feeding and miraculously loses her milk prior to her death and Felicity is with child, then gives birth, thus avoiding some form of death or other.  This is a story from 203CE Roman Empire in Carthage, of course, so we can observe how some things change and some things are forever the same.  The core martydom for emperor story may be of another world (although a speaker before the presentation would deny this) but the humanity of belief, family, conscience is common.  Mike has written a fabulous musical work and, as always, done it with love and purpose.  I am hugely impressed and often touched.