All the way from Belgium

Right from the top it was a concert of great joy. Kristen and her hubby were back from Belgium, presumably to catch up with family and friends. They’d picked up old mates for just two concerts in Oz while they were here. We were lucky that one was in Canberra at Hippo. Not surprising, given that Kristen is a Jazz School graduate, and a renowned one at that. I don’t know, but I guess the family’s here in Canberra. I overheard talk of Bungendore, and, let’s face it, you have to be a local to talk seriously of jazz in Bungendore! The band might not have been overly comfortable with all the charts (evident only from the level of concentration; not from the performances), but they were having a great time together, and we were included in the good times. 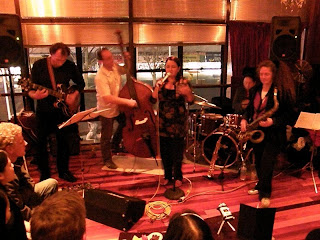 I seldom get to report on voice here at CJ. It’s a love of mine, but it’s too often tame, standard-ised. This was nothing of the sort. This was joyful, ecstatic, lively, richly improvised. There was some scat, some fabulous vocalese, latin, standards. There was even pop, but done with jazz sublety and sophistication and competence that’s missing in its original inception. I was blown out by melody with subtle inflections, improvisations over a full vocal range, slides, glissandos, wide and controlled vibrato, accurate pitching, massively complex patterns and runs. Each syllable was intoned with care: held notes dissolving in broad, controlled vibrato was wonderful, but just par for the course. It was a fabulous display of vocal control. But the whole band was unified and expressive, and strikingly rich for only few players. They often dropped to two or three players during a tune, say, guitar and drums, or sax trio. But then they’d explode together into solos, collapse to vocals, often with well-heard harmonies on sax, then rise again to a peak, and so it goes. Busy, true, unified, and so much fun.

We expect personality from singers: more than from other players. And Kristen was an engaging personality, too. She’d drop jokey lines, mark out pitch with hand movements, busily concern herself with stage matters. This was intimacy, but with a respectful distance. Not mawkish; not intrusive. She was obviously disappointed with the chatter against a few ballads, commenting “That’s OK, just keep talking” and the like, but she was too professional to miss a step, and subtle enough that it didn’t offend. (But then it didn’t do too much good, either).

The band was: Kristen Cornwell (vocals), Sandy Evans (soprano, tenor sax), Fabian Hevia (drums), Jeremy Sawkins (guitar) and Belgian husband Christophe Devisscher (bass). The music was a mix of styles, but all done with irrepressible energy. There were standards and latin and bluesy and funky styles. There were lots of capable originals penned by Kristen. (Her “Billygoat” was dedicated to her cat, and it was a perfect feline incarnation: a hot bop starter, followed by slinky, improvised midsection). There was vocalese by Joni Mitchell (Dry cleaner from Des Moines) and Kurt Elling and funky electric music from Chick Corea. There was even Suzanne Vega and Alan Parsons (!). Quite a mix. It was all great, but I have to vote for the sheer expertise of vocalese. The Elling and Joni Mitchell tunes were knockouts!

As for the other players, Sandy Evans was her concentrated best, as she layered on harmonies with the vocals, or awaited gaps for expressive little fills, or just soloed so intelligently and responsively. Jeremy Sawkins did great chordal backing, and fusion-styles, dirty solos. I sometimes lost Christophe in the mix, but he was busy and so relevant. You could sense a different culture in his playing and presentation. Modern Euro is not downtown Australia. There was an interesting contrast of styles here. But his solos were fast and furious. The inevitable quip that “I married my bass player because I’d lost too many bassists in the past” added an intimate jokiness to the occasion. I leave the last for Fabian Hevia. I believe Fabian’s a holder of several qualifications from the Sydney Con, but he also provides a different cultural twist. His South American earthiness and sensibility is a favourite of mine. I’ve heard him on percussion several times, but it’s on drums that I particularly love his playing. Technically, he’s hugely but subtly skilled (hear these hyperfast, supercontrolled one stick drum rolls) but he’s also so, so expressive. This guy slinks around a kit, interpreting and countering the playing of the others in the band. He’s earthy and liquid: drum heaven.

So you’ve probably got the drift. This was fun, engaging, energetic and highly skilled. Nice one; thanks to Kristen and her top mates.