A day at the Jazz School

It seems that yesterday was the Open Day for all manner of tertiary institutions in Canberra. I knew of the Open Day for the Music School, but not of the others; too bad. There would be lots to visit and check out around our several universities here in Canberra. My interests take in more than just jazz. I missed a classical double bass workshop, an open rehearsal for the Magic Flute (the upcoming ANUSM student-staged opera for this year – not one to be missed), a fortepiano recital, a samba presentation and more at the classical school. Presumably there would have been physics and astronomy and philosophy and literature and photography and geology and much more to visit. It’s all fascinating, but jazz it was. In fact, the sessions were so interesting that I hardly left the Band Room, the main performance space at the Jazz School, for 5 hours. 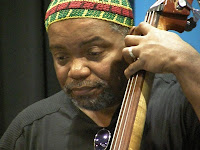 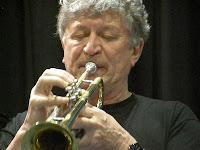 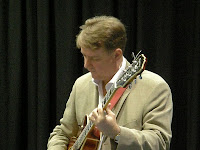 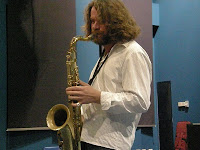 I heard performances by the Faculty band, ie, the teachers: too short - only two tunes - but impressively competent. Also the Commercial Band and the Big Band. I love these larger ensembles for the chords that ring out from the collected horns, so this is always a highlight. The Commercial Band is spunky and funky with tunes by the Yellowjackets and Matt Harris. They also played a great version of Footprints. The lushness of the horns, original lyrics written and sung by Sophie Leslie, and the subtle moves from the Footprints riff to walks and back again were a thing of genuine beauty and a good bit of emotion. A stunning performance of this true classic. The Big Band is bigger and more mainstream. On the day, it featured several Jenna Cave and Bob Mintzer charts and a great version of Moondance. Not a favourite of mine, but Madeleine Hawke sang it with edgy voice and a dissonant scat solo. There were many satisfying solos between the two bands. I especially remember a subtle keyboard solo by Ben Foster in Footprints, several solos by James LeFevre and Carl “Nuke” Morgan, a fluid drum intro by Evan Dorian, and a tasteful bass solo by Bill Williams. All notable players. 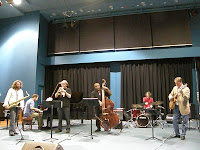 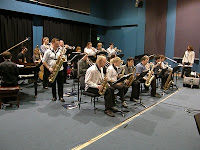 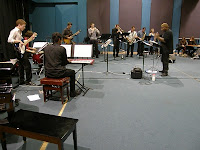 The rest of the day was taken by three workshops. The first was Matt Thompson on piano. There was a good deal of chat on school entry, but particularly interesting was a demonstration by Ben Foster of his advanced studies topic: self-accompaniment styles of several jazz pianists. He talked and gave short demonstrations of the solo styles of Kenny Barron, Oscar Peterson, Fred Hirsch, Bill Evans and Harry Connick Jr. The move was from stride and walking bass lines, through more syncopated styles to a fugue-like style which combined right and left hands into a single, chord-implying whole. John Mackey (sax) followed with a session on jazz improvisation. There were lots of ideas to recount; here are just a few. Only 1-2% of material is new on stage, it’s mostly learnt in practice; turning maths into music; invest in a piano; studying with a piano; sounds of one note against multiple chords and levels of dissonance; 4 or even 15 hours a day to practice; setting objectives in practicing; visualising what you play; writing choruses as practice; learning the basics; sound projection; playing Giant steps as a ballad (!); how to learn 276 scales in a week (!!); and more. The last workshop was on rhythm sections, with Eric Ajaye (bass) and Col Horweg (drums). Some thoughts that hit me were: concurrent 3/4-4/4 feel as the great polyrhythm, the fundamental way to cross the bar, the DNA of African and Latin music; better to listen to 1 CD 1,000 times, than 1,000 CDs one time: you can listen to great CDs innumerable times and always learn something new; the best books about jazz have words (“Thinking in Jazz: The Infinite Art of Improvisation” [Chicago Studies in Ethnomusicology Series] by Paul F. Berliner was recommended); play as yourself, don’t be defeated trying to play as someone else, everyone has creativity to expose (music is a confidence game). There were also some anecdotes: Freddie Hubbard was mentioned; Miles apparently didn’t know All Blues would be in three when he entered the studio (!) and the subsequent observation that All Blues is in 6 in the Real Book; or the comment that when people refer to their experience in playing with Miles, they just nod and say “ah, ha”. There was some lovely playing during these workshops: Eric and Col on bass and minimal kit displaying all manner of styles and approaches on All the things you are; Matt playing some stylish piano duos with students; John demonstrating Coltrane changes, in and out playing and some pretty explosive blues.

In all, it was a dense inundation of jazz over several hours. If you missed this one, try to get there next year – it’s an annual event.
Posted by Eric Pozza at 9:18 pm

Email ThisBlogThis!Share to TwitterShare to FacebookShare to Pinterest
Labels: ANU School of Music