White Eagle is always an anticipated outing. Usually, it’s a local band and an import. Both are interesting, often in vastly different ways. But they are always interesting. So, before I proceed, let me make a plug for WE. Don’t let the music die. Support White Eagle. It was not a big turnout last night. WE needs audience. Be there. 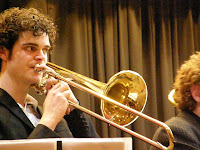 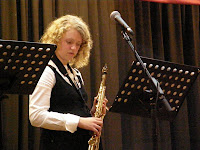 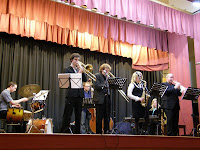 The local band for this latest event was one I’ve been awaiting, the Sally Greenaway Septet. It’s made up of very capable Jazz School graduates, but it was not this so much that interested me. What was interesting was the potential for original, richly orchestrated music, rather than hot blowing. We got quite a bit of blowing, too, but the sounds of a largish front line was the attraction. I was thinking of bands like Carla Bley’s or Dave Brubeck’s Octet. This is a band with multiple composers and comprises 7 players including a decent front line. Promising! We got Sally Greenaway and Jenna Cave, composers who impressed last year with their “Take it in colour” CD. Added to this were an original composition by Rob Lee and some covers of Stefon Harris, a favourite of Sally's.

On the night, the Septet comprised: Sally Greenaway (piano), Phill Jenkins (bass), Ben Braithwaite (drums), Jono Apps (trumpet, flugelhorn), Jenna Cave (alto, soprano sax), Alistair Clarke and Rob Lee (trombones). As you’d expect, the sound was frequently luscious. The clear, bell-like brass tones were bliss, most notably when the troms played with the softer flugel. The sounds were highlighted particularly on Sally’s compostion, Take a break, which featured the four horns twisting conterpoint lines with no rhythm backing. The tunes were mostly modern styles, but a final number used cut-time and sounded of early jazz. In all, 5 of 7 tunes were originals.

Solos were played all around. I was especially taken by Jonno, who just seems to improve his soloing with each performance that I hear. Both the troms did highly capable solos, but I must highlight Alistair’s playing on the night. He replaced Valdis Thoman at short notice, but you wouldn’t have known it. His reading was exceptional, and his solos lively and true. There were impressive solos from Sally and Phill, and I especially liked Ben's effort with unison backing. 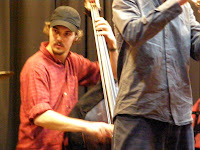 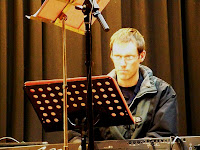 The import for the night was Arrow out of Sydney. They seemed to be missing one member (vibes) but the remaining players performed brilliantly. I understood why when I noted the names, well known in the JazzGroove scene. Unusually, Arrow is led by a drummer. But this is a drummer who composes, so he’s a more musical style of player. His compositions were cryptic in titling, modern and quite melodic in style, and often displayed rhythmic changes or twists which we should expect in a drummer’s charts. Just for the record, the tunes included titles like: The Russian, Obtuse, Solipsism, Big C reprise and the like. Wayland was clearer in its dedication to Sean Wayland, the Sydney pianist now resident in NY.

Arrow was Paul Derricott (drums), Mike Majkowski (bass), Simon Ferenci (trumpet) and Hugh Barrett (Rhodes/piano). Missing on the night was Dale Gorfinkel (vibes). Every player performed with excellence, and the band itself displayed that energy, commitment and passion that I’ll put down to a big city buzz. Whatever, it was hard and inspired from the top. I loved Simon’s long, sinuous and always correct solo lines. Great playing! Paul played with power and grace, pushing the tunes but also playing with considerable but subtle chops. A perfect match for Mike. Mike’s visited Canberra frequently over recent months. He’s always hugely committed and perfectly capable: an excellent rhythmic support, but also a capable soloist. Amusing at times too, as he strums or whacks or drums the bass. It’s not done for humour, of course, and often it forms a perfect, unexpected climax to his solos, but you can’t deny a certain tongue in cheek aspect. Hugh performed well too, variously octave solos or more mainstream, in our out of the harmony. This was occasionally quirky but mostly hard and committed modern jazz with an attractive melodic component. Very nice stuff.

So, another night that hits the mark at White Eagle. Let’s keep it going. Keep music live. Make a date with each White Eagle.
Posted by Eric Pozza at 1:09 pm