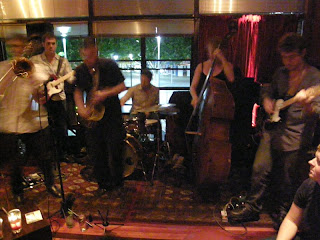 Zoe brought her bumpkin Buttercups to town last night for a great night of whacky but intelligent, hick but danceable music. I’ve written of the CD recently, and many of the tunes were from that CD. This was a six-piece jazz-trained outfit, but playing across the styles of rockabilly, reggae and blues, but always with the tinge of the jazz influence, despite the ever-present 1-3 drum figures. I guess this is one of the options for where to take jazz in the new century. Whatever, it’s entertaining, infectious, and very different sounding. Perhaps the defining sound is the banjo, which brother Ben plays on most of the tracks. But Ben’s given it a strange twist, with this normally rhythmic and ostinato instrument played as solo modern jazz guitar. Weird, as it imparts a new choppy, staccato sound to a jazz guitar solo style. The drums are also key, with other brother James playing impeccably on the square 1-3 beats, and ably managing the growing intensities of rhythm section against solos. The sleazy front line of trombone and alto sax are perfect. John Hibard on trombone plays the part to perfection, with energetic gyrations on his lengthened instrument, and with the addition of a great rendition of the song from the CD. Dan Waples played perhaps the most jazz style on the night, but even so he seemed to forego wailing and screaming in a Coltranesque style, preferring an elegant, intellectual, probing style that to me was reminiscent of Chris Potter. There were several excellent blues solos from Aaron Flowers, who’s a guitarist of few but meticulously appropriate notes, and hot soloing by Ben ranging across rock and fusion styles when he did get on his guitar. Both guitarists played Telecasters, and the sounds were to die for. Zoe held it all together (in calling the tunes as well as on bass) and played a few of her own solos. She’s gloriously understated in her playing and always lyrical. Lovely stuff. It was a wonderfully quirky, joyful and entertaining night at the trying edge of the art.