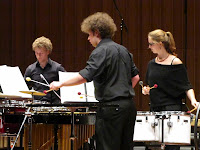 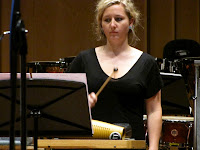 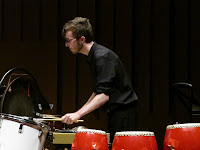 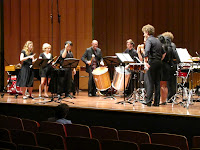 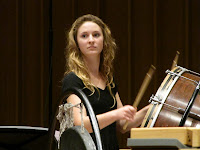 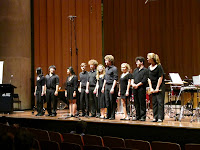 Classical percussion concerts are surprisingly delightful things. I got to one this evening by the Australian Youth Orchestra Percussion Ensemble. I’m always amazed that these batterers learn the keyboard, and wonder what it is that groups marimba or vibraphone with the far more earthy skinned drums. I assume it’s just that they are hit. Piano strings are also hit, and pianos are also described as percussion instruments, but they are not hit with a stick or a mallet and they are not played by percussionists. I was amused the description of his art by one of the percussion tutors: “hitting, bowing, scraping … or just looking at something aggressively”. It’s not at all true - lots of percussion is soft and detailed and we heard drums voiced with the gentlest of taps tonight – but it fits the image and it’s amusing. They seemed to joke aggressively too, or at least frequently. Is aggression a characteristic of percussionists? From the looks and sound of them, it was very far from my impression. So how was the performance?

I’d use words like light, sweet and even discursive to describe this performance. There was some groove but not much was intense or danceable. The first tune was probably the strongest groove. This was Ritmica no. 5 (1930), Afro-Cuban music by Cuban composer Amadeo Roldan. Early, it was delightful with a quiet but busy interplay of multiple instruments - bongos, cowbells, toms, a range of Cuban percussion - but then, several times, it came to a stop with insistent unison quarter note hits from the deep toms. I heard this like African jungle drums, talking drums, a complex interplay of simple patterns. The next tune was Canticle no.1 (1940) by Lou Harrison, a student of Schoenberg and collaborator of John Cage. This was introduced as intricate through the overlapping of simple rhythms. I heard is as intellectual, less bodily, with a clear influence from gamellans and again with a structure in several parts with stops and starts. Third was an original compostion, tagged as an improvisation but pre-composed by the performers, Rhapsody on a theme (2012). I missed some details, but the process went something like this: the students were provided with a 4-bar theme around Christmas and asked to develop a 212-bar (?) part. They then put them together and perhaps edited their parts and performed. It was busy and conflicting at times, but I enjoyed the movement between lashings of contrasting sounds, even if the piece lacked obvious structure. But huge congratulations to tutors and students for the creativity of it all. Improvisation is not a feature of the classical field and a task like this that breaks the reticence is a great exercise. The fourth tune was the longest and most complex: Gavin Bryars’ At Portage and Main (2009). Bryars is a jazz bassist, as well as a composer and student of John Cage, and you can hear the bassist approach in some of the chordal segments. This was performed on 3 marimbas, 2 vibes and various drums and cymbals. The intersection of Portage and Main in Winnipeg is supposedly the coldest and windiest corner in North America. I heard mystical rather than cold, although it could have been snow, and only once thought of a possible wind, but it was a lovely, lyrical and lengthy piece featuring the dull thuds of the tuned marimba and the ringing, metallic vibes against downy kick drum and toms and swelling cymbals. Portage and Main must be a quiet corner but it informed some attractive music. The concert ended with a very short Roldan piece, much like the first, Ritmica no.6 (1930).

So, this percussion concert was anything but aggressive. Yes, they used mallets and sticks and the like, and they hit things, but this was detailed and delicate and only once or twice letting go to forte. Quite unexpected for we new initiates.
Posted by Eric Pozza at 10:04 pm