Near enough to the best 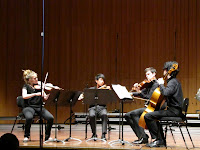 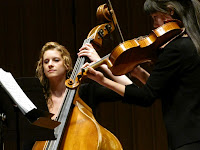 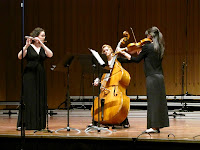 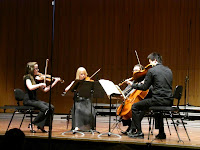 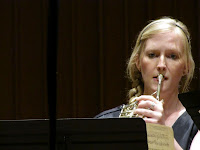 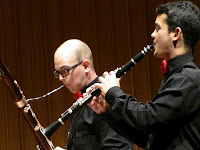 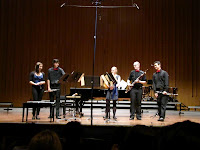 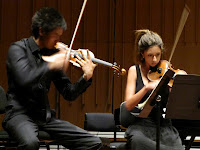 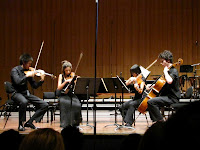 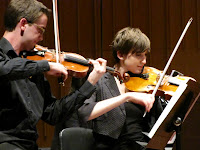 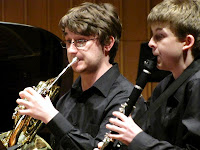 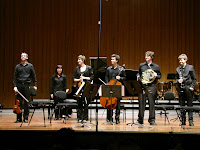 “This was the best music I’ve heard”. So said a young audience member, probably an AYO student, who was sitting just beside me after the Ligetti Bagatelles. We were at the Advanced Chamber Music concert of the Australian Youth Orchestra. I must say I was verging on accord. I really loved the Ligetti, but the six pieces on the night were so varied and such an intellectual treat that I won’t pick one. This was a fabulous concert, richly varied in tone as well as style. I’d expected strings – quartets or larger groups of strings, perhaps a chamber orchestra – but this had piano, horns, clarinets, flutes, even a bassoon, so it fascinated my ear and also my intellect. Chamber just means Room, so the music is smaller and more intimate. I shouldn’t have been surprised by the range of tones. I’m also fascinated to think of chamber music in the context of an orchestra. The harmonies and counterpoint and structure are still there – eg, the first and second violins, viola and cello of the string quartet are massed in a chamber or syphony orchestra - and they retain a similar relationship but the scale is so much more intimate and the individual player is more exposed. Chamber music must be a fearful thing for an orchestral player, especially for the string players who usually sit amongst massed colleagues. Chamber musicians have real, personal voices and their music is obvious as conversation as lines pass between players.

The Schumann String quartet no.1 in Amin was what I’d expected. Lovely, scalar playing, a bouncy 6/8 first movement, a lyrical second movement and a busy third movement in common time. Nicely played, attractive, popular and not too challenging. Schulhoff’s Concertina for flute, viola and double bass was perhaps the biggest challenge of the night and a stunning twist after Schumann. It’s a modern work with unusual instrumentation. I guessed they were senior AYO performers: this piece was obviously not easy. It starts with a long and jagged melody of big intervals and moving dissonances on flute against a lengthy unison backing part from double bass and viola. The melody moves to viola and the others play the unison. Then through 4 movements culminating in what I thought was a jig. I was flummoxed by the count, left guessing at the jagged intervals and wallowing in the mobile harmony but I loved this modern richness and complexity and invention and the playing was great. I remember chuckling at one arpeggiated line that I followed from bass to viola but which sounded all the world to me as one instrument. The trio was obviously enjoying it, too. This was challenging and a real treat. The last before the interval was back to lyricism with eminently recognisable themes in Borodin’s String quartet no.2 in D. This was romantic, pastoral, lyrical, with some beautiful melody and mainly in triple time. Sharp, imploring first violin, a soft and responsive second violin, the mellower viola and deeper cello that echoed lines to each other. I was interested that the third movement felt distinctly symphonic to me, and wishing for a bigger group of performers.

After the interval were the delightful Six bagatelles by Ligetti. Bagatelles are light and playful pieces. There were 6 of these, so considerably varied. I heard beautiful and clear melodies in one, liveliness in another, reticent melody and sudden changes in another, syncopations and changed instrumental groupings and even circus music in another. Exciting and intriguing music that I wish to hear more of. Next was Shostakovitch’s String quartet no.9 in Eb. I’d loved the panoramic, epic view of the Shostakovitch symphony at that earlier AYO concert. This was similarly complex and large in scope, but I’ll remember it for untiring activity: syncopations, staccatos, crossing rhythms, various solos for all the instruments, lines that bounced, bows that bounced, bow hairs that hung limp after shredding with the energy of it all. This was constant activity and exhaustive in dissection. Stunning music played with great commitment. The final piece was one for the road: Dohnanyi’s Sextet Op.37. Again, this is a piece with mixed tonality – piano, two violins, cello, horn, clarinet - but the style is lyrical, romantic, lush. What a nice work to ease us to the road after some very demanding music. This felt romantic, nationalistic, march-like with lush harmonies and simple, satisfying melodies. I remember falling waterfalls of notes from the piano, the so-pure tone of the clarinet, and even some swing-band-like clarinet melodies. This was not trivial music, but it was one to relax the soul. It’s not surprising that it was here I thought how wonderful are these musicians who will commit so much time and discipline to such beauty. Music is a hard task master. This music was gloriously beautiful with a soft underbelly.

And so another concert ends. I’m commenting lots on variety and I expect this will be my theme for AYO2012. The playing has been great, but the choices have been modern and varied: great for listening and performer alike.
Posted by Eric Pozza at 2:44 pm