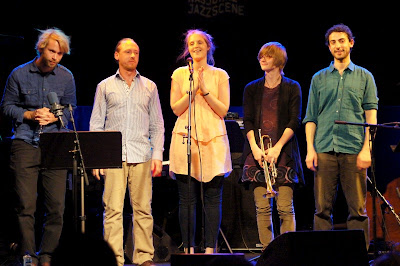 Thought-Fox is an Irish band, but as I listen to the patter of singer and leader Lauren Kinsella, I learn that they are based in London and pianist Tom Gibbs is now resident in Glasgow. This music is joy to my ears.

Firstly, it has vocals, although mostly wordless, and that makes it human. Lauren is all breathes and puffs and clicks and improvised vocal tones. I think Bjork and a singer I chat with mentions Sofia Jemberg. Lauren tells me later that she finds inspiration in the tones of languages even when she doesn’t understand them and this fits. Think of those vocal tones that you lose when you settle to your native language. She continues to play with these. There are words there, too, although less often. Words form TS Elliot’s The Wasteland in one; words written by Lauren in another; in another there were words written by another band member that Lauren was thankful for, joking that singers usually get stuck with writing the words. But this was a lovely band, too, not just a singer. I felt Lauren melded wonderfully in unison lines and in intertwining melody with trumpeter Laura Jurd (lovely to see a female trumpeter). Laura’s solos, too, were strong and with meaning: some nicely unexpected pitches, some imploring tones and some one long flourish that surprised me but demonstrated skills. I noticed Tom Gibbs on piano as secure in an easily dissonant but sturdy style. I really liked the confidence and steady thought, but I didn’t expect the several piano trio segments to be explosive. They were. Drums were not flashy but were purposeful and bass was strong with nicely jagged syncopation. This trio was paying together so nicely. Then there were some all-in improvs where bass set an unwavering ostinato and the voice and trumpet and piano and even drums variously appeared with snippets of melody and returned to a melange of rhythm. And then I realised how worked were the arrangements and how neatly the band performed them. Lauren had mentioned that they are about to release their CD so maybe it’s recently well-practiced, but she told me they are also preparing for a festival gig. Whatever, this was well prepared and attractive music with energy and I enjoyed it with my feet as much as my head. In some ways, a compleat band. Thought-Fox are Lauren Kinsella (vocals), Laura Jurd (trumpet), Tom Gibbs (piano), Michael Coady (bass) and Simon Roth (drums).
Posted by Eric Pozza at 5:12 pm