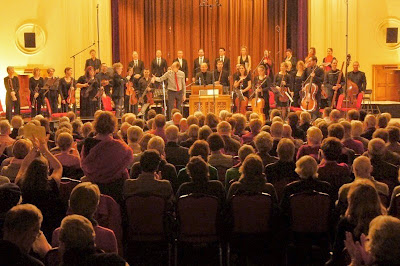 There's so much that goes through your head after a decent concert. This was the Canberra International Music Festival and the concert was Bach (with some ring-ins) and we could only leave with beaming smiles and a rollicking gait. Firstly, we were talking of the Albert Hall as a concert venue, and how it's so good for chamber work of this size with an audience to sop up the reverb: live but not soppy; clear voices and ringing baroque trumpets; perhaps a little bass heavy (Max McBride was alone but filled the bottom end). And the experience is so European concert hall with an architectural experience that is so out of place in our new metropolis, with the large windows and suggested columns with Ionian scrolls and hinted flowers. Then the music. A jazzer said to me in passing that "he sure can write", meaning Bach can compose. It's an ironic throwaway line, of course.

I'd read that the Magnificat was originally written in Eb (the current version is D major). It was first performed at Christmas 1723 with two other new works. Bach had arrived in Leipzig in May that year and had already written 30 cantatas by Christmas. Genius. Magnificat (D major, BWV243) is ~27 mins in 11 movements for 5 voices and 5 instrumental parts. It starts with a joyous, vibrant canon on "Magnificat anima mea Dominum" (My soul magnifies the Lord), through various solo sung parts; two very different sopranos, perhaps over oboes or strings; bass over a ponderous but amusing accompaniment of cellos and double bass; countertenor and tenor with lyrical melody over violins with pizz bass and short cello. Always the lanky but sinuous Roland Peelman conducting by feeling every nuance. I can understand the value of a conductor when I see this man. Through more choir with a sudden stop (on 1+?) and an end with baroque trumpets and timpani; a 3/4 introduced with violins and cello responses, and again that neat, square and brisk bass; then countertenor with pure flute tones; three females singing over one cello and organ; a vocal canon starting elephantine and rising through male to male to female to female, dignified, then into an exultant final Gloria with trumpets and timp. This is not all, but an impression. Half an hour of the most perfect of music. I'd first thought this is the most perfect music during the final movement of the previous work, Bach Concerto for violin and oboe in Cmin BWV1060. This is three movements, instrumental with two solo melody instruments, with a middle movement in 3/4. 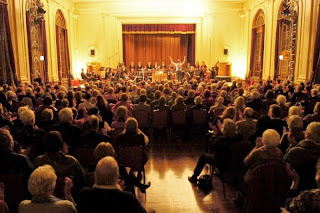 It is fabulous and beautiful and unrelenting and sequenced, but it's also a piece I've heard a billion times on ABC RN LNL so it has the advantage of being ridiculously familiar. Elizabeth Wallfisch was to solo, but had fallen off a bike so was replaced by Matthew Greco at short notice. He did a great job, although he was often a bit quiet for the oboe. A fabulous work and very well done. I'm thinking European familiarity with this music, now. Albert Hall suited the baroque with intimacy and acoustics, but also the informality, reminding me of unexpectedly casual canteens at the Amsterdam Concertgebouw and the Berlin Concerthouse.

What else? Before the interval was a short fanfare, Handel Battaglia from his opera Rinaldo, all trumpets and timpani and suggestions of battle (I missed this) and agitation and ferment. Then a change to the program due to Elizabeth's bike accident. Another Bach was replaced with an oddly unexpected but fascinating duo playing 900yo Armenian music of Gurdjieff and the Silk Road. These were two tunes played on duduk and organ: Grigor Naretski Fowl of the air was a mutating scale over a single note organ drone; Khatchatur Taronetsi Mystery profound had a more complex duduk melody over small organ chords. I heard lots of long notes; (I guessed) flat 3s and 6s but the scales changed; slithering legato and strangely Mid-Eastern vibrato. Lovely, diverse and meditative. Then one more Bach, his Cantata Es erhub sich ein steit (There arose a war) BWV19. It's magnificent but I don't hear the war reference without reading the German. As for performers, I couldn't help but love the baroque trumpets and timpanis when they let fly. I admired all manner of instruments - strings, oboes who had several featured passages, the lovely baroque organ, the cellos and bass that also had their features. But most of all I loved the voices. This was the Song Company presumably with a friend or two and they were glorious, as solo voices or intertwined in a canon. Precise and beautiful voices, both men and women. So, this was a huge pleasure and more coming.