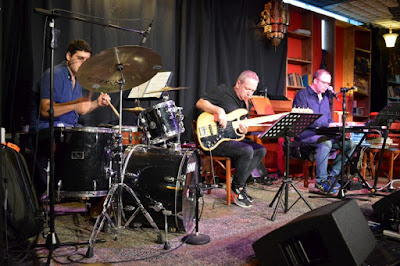 I have friends who don't feel at all this way but funk and synths are bliss bombs for me. I love those analog-like tones bent with pitch and modulation like a digital mouthpiece, varied in tone yet electronic and new worldly. Not that it's so new worldy these days, of course. Analog synths date from the '70s in common band usage even if they still don't enter the worlds of the some connoisseurs. But they are wild fun and intellectually delicious in the hands of a capable player who understands harmony and degrees of tonality or other like Sean Wayland. And doubly so with a funky bassist playing e-bass, this time Brendan Clarke after several weeks playing for The Book of Mormon where he's been switching through e-bass, fretless, double and bowing and where he found a refreshed enjoyment with the electric version, here a JB as in Marcus Miller. And a great young drummer who hits firmly and decisively with driving time and quizzical double time fills, Alex Hirlian, recent winner of the National Jazz Awards, this one obviously for drums, at the Wangaratta Jazz Festival. So it's not just me who's impressed. This was funky and exciting and musically satisfying.

The tunes were mostly originals from Sean, but two from Sydney's renowned and oft-remembered altoist, Bernie McGann, obviously by players who knew him. And one tune from Nick McBride, played by Nick McBride who was in town and sat in for two tunes. The other amused me in the guidance given by Sean on stage, to Nick, before playing: "Anything, just play". Hardly clear guidance but it worked a treat. It was obviously a little prepared gig, as only jazzers can carry out with panache and convincingly like this. Perhaps that's not fully true because jazzers prepare for just this eventuality, with knowledge of harmony and theory and the rest that others seldom learn. To end, I laughed at Sean's aside: "Right, we did it, we did a giggle". Relief and sly humour. And how easy to travel these days with keys! Here it was a keyboard controller, perhaps 5 octaves, with a second tiny controller (~1.5 octaves) to add accompaniment, a laptop and a small Yamaha PA for amplification, but the sounds were huge and fat and the complexities of accompaniment and solos were delicious. Interesting also to see and hear the difference in drummers: Alex more firm and unyielding and spacious; Nick more gentle and full and liquid. Both to die for. And Brendan, funky to a tee and deep and busy but always purposeful. A fabulous outing for lovers from the '70s to now.

Sean Wayland (keys) over from NYC to play with Brendan Clarke (bass) and Alex Hirlian (drums). Nick McBride (drums) replaced Alex for two tunes.
Posted by Eric Pozza at 11:45 am