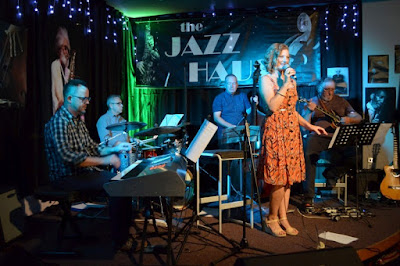 They say most popular songs are about love. We went to hear Trish Delaney-Brown and she sings and writes songs of love, but more mature, more established, more experienced. Maybe it's better to say that she writes of relationships. There's intimacy and honesty here, but it's tempered by experience and it's a pleasure. It was a pleasure all round, of, course. She's a wonderful singer with serious training and great skills. She was a foundation member of the Idea of North, formed from the Canberra School of Music (pre-ANU) back in the '80s. She was touring her recent CD and mostly the band was from it (I think just Brendan was a ring-in) and they are peak players, sharp and understated and capable of abandon when it fits. She sang a few standards, too. I was wary to hear a start on Blue Moon, but I didn't need to worry: this was far more adventurous that that opening suggested. There was swing, but also grooves of various types, always clear and understated.

Was there a foot wrongly stepped anywhere by Nic or Greg? Brendan was the eminent bass that we expect and Jeremy was understated but could let go with energetic solos with just a minimum of effects or switch to finger-picked acoustic for that supreme ballad, Nature boy. There were several unisons of voice with guitar and later keys that were obviously scored, presumably for the album, and they hit me for six. Then some delicious grooves, one an arrangement borrowed from Dianne Reeves for Softly that let go into a devastating solo from Greg and a short followup from Nic, who otherwise displayed immense decorum throughout. Trish writes lyrics, too, of real profundity and considerable astuteness from her life. One lyrics was to a tune written by Dave Panichi for a young cousin, Ruby. Another told of the pleasure of picnics as simple feasts and yet another of relationships as The Game, and Neat surprise and Thousand stories. All originals with their stories. Then the driver, What ya got, and the hard swinging paean to Ray Brown, Face of the Bass, which placed its demands on Brendan (which he managed with aplomb) despite the jokes of which Ray Brown, that RB of Tuggeranong? And Softly and Nature boy and a superb reconstruction of a murmuration of starlings simply called Birds. Trish and her band were classy and mature and massively skilled and a deep pleasure. Loved it.