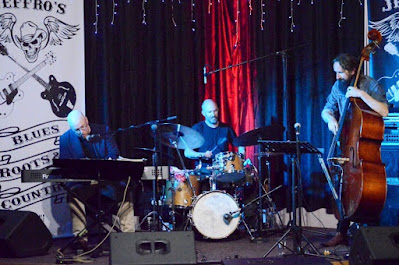 FWIW, a note of consternation for readers.  Blogger has changed its publishing interface and I can no longer publish multiple images to display as I always have.  So, just one pic per post until they fix this.  I'm not alone: there's a discussion happening with lots of disgruntled bloggers.  How often do updates reduce effectiveness in computing?  Too often.  So, sadly, just one pic posts from now on.

It's the mark of a seasoned professional that they've played all manner of musics and they can pull different styles off with some conviction.  I knew Wayne Kelly was seasoned and professional from seeing him around town over the years but this was particularly obvious this night.  He wasn't playing a jazz bar, but the Lone Wolf blues-rockabilly venue of Jeffro and fondly remembered Bucky (vale Bucky).  So we got a mix of musics but with the conviction and wit and jazz-tutored chops of Wayne.  Not that he did it all alone.  He had James Luke and Chris Thwaite on side.  James has been everywhere over the years and Chris has been around for a similarly long time, although I haven't seen him for years.  Amusingly, the name suggested the styles, Wayne Kelly Experience, although the pop was the Polics (Walking on the Moon) and Beatles (Strawberry Fields forever).  Perhaps the bluesier numbers with Jeffro sitting in on blues harp were more Hendrixy, but they included some.  Or the Trane-ish  original, King of Kings.   Then there were a few songs, both ballads, with Wayne doubling on vocals, When I fall in love and Crazy, both immensely popular and clever tunes.  And the intro on Nardis, the first bars, had me floored with jazz subtlety and harmonic invention.  Wow.  Then another Bill Evans tune I'd never even noticed, Very early.  But then, after interval, was something different again, solo Wayne on Maple Leaf rag and, oddly but intiguingly, some classical solo piano, Chopin nocturne F#maj op.15 no.2 and two Bach Two part inventions, no. 14 Bb and no.8 (F?) that everyone knows.  Wow; and intriguing playlist.  Quite and experience.  And the most fabulously substitutioned Doctor Kirkland Blues (after Kenny Kirkland): so, so clever.  But this is not to say his offsiders weren't worthy.James blew us out with a string of solos.  He's quick and expansive and melodic, although we couldn't alwasy hear his that well.  That's a problem with amplifed double bass, here over a bluesy PA.  And an interesting looped take on Strawberry Fields, starting with pizz then through a number of bowed harmonies under the melodoy.  Verr cool.  And Chris, solid and steady, intriguing with a djembe-styled solo on King of Kings, and intriguing with some very satisfying, determined solos otherwise.  And not to forget Jeffro, more blues than jazz, sitting in on a few tunes that suited him and giving that plaintive edge of authentic blues.  Takes you back to early jazz, I guess.  Before The Police or Beatles, before Coltrane or Oliver Nelson, before Ellington (oh, Caravan was in there too) although not before Bach.  So, some great playing and an expansive vision.  I guess that's an experience to savour.