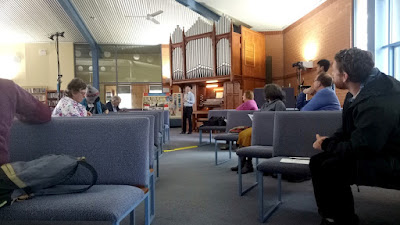 The Wadsworth organ seemed out of place in this modern church space, all stage upfront with lectern and no altar, but with resident band gear in the corner.  The organ, though, had history, birthing in 1908 in Manchester and finding its way through a number of moves to Marist College here in Canberra, then finally to the Westminster Presbyterian Church in Cook.  Linus Lee played it for this RSCM (Royal Society of Church Music, Australia, ACT Branch) concert.  I'm working my way around the organs in Canberra through this lovely group that presents monthly lunchtime concerts around town.  It's a pleasant interlude with these unique and complex instruments. They are mostly not the grand organs of European cathedrals, but satisfying none-the-less, even if their spaces here in Canberra can lack requisite stone to share their profundity. Whatever...  This concert featured Linus Lee playing a range from Buxtehude through Bach and Beethoven to Franck, Ketelbey and Lefebre-Wely.  There was a pleasant mix of stateliness and lighter contrasts, right from the Buxtehude on, and counterpoint and renowned melody - the Beethoven was his piano sonata no.8 Cmin put to organ so less percussive and fuller.  And a string of organ grinder-like joviality and joy to finish.  That was a little unexpected but clearly welcomed.  There were some low notes that felt weak and some clunks and knocks but that is all part of this mechanically complex instrument that demands such maintenance.  The cost of that, the age of the instruments, the lack of expertise militate against that these days.  But the sounds can be blissful and there were some lovely passages in this.  Thanks to RSCM(ACT) and Linus Lee for the concert and Westminister Presbyterian for the opportunity.