“10 Part Invention … we’re better. There are only 10 of them.”
It was obviously a jest from David Theak: brimming with pride in his band, but also respect (and a touch of competitive spirit) for the other ensemble. The band was enjoying itself, and it was evident. The 17 (yes, 17!) members of JazzGroove’s Mothership Orchestra were on tour, occasionally smiling, but mostly concentrating on the charts, and playing exciting music with the visiting German pianist. How could they not be having a great time? And the feeling in the audience was mutual.

A big ensemble like this is a rare experience. They are expensive to bring together, and demand complex charts, and presumably a good deal of rehearsal. Mothership’s tour is promoting their CD, “The Mothership plays the music of Mike Nock”. On the night, Mothership played some tunes from that CD, several by Florian Ross (the visiting German pianist and composer who was playing with Mothership) and a few others by members of the band. To represent the mainstream, there was even a rendition of Autumn Leaves (arranged as Autumn Things) which, I thought, was evidence of the nature and the quality of the performance. The head was obvious enough although slightly twisted, but the harmonically adventurous solo by Florian Ross was abstruse, while the chordal structure just hung in there due to some adventurous, but still evident bass from Brendan Clarke: quality stuff. There’s tons you can say about this night. An enthusiastic, but not large, audience; interesting and engaging charts; rich moving harmonies; melodic lines bouncing around between sections; rich and varying tonal palettes; strong rhythms backing some great solos. The power of a big ensemble like this is something different from the best small jazz combo. It’s loud, complex, mobile, rich; it’s another experience although still jazz, and too rare.

Of course, there are always solos in jazz, and no disappointments here. For me, some standouts were Florian Ross with harmonically rich solos that only a pianist can do, and a crossover classical-music approach in several spots which identified him to me as a European jazz player. At one stage, there was a unique string of solos in a straight blues tune where four consecutive trombone solos (!) were followed by a fabulously melodic, fluent and expressive bass solo by Brendan Clarke. There were several solos by David Theak on alto or soprano sax that I particularly enjoyed and some guitar solos by James Muller that just brought the house down. The last developed from fast and interesting, through sweeps and whole tones and Scofield, to free and passionate, and ultimately to a dead stop; truly overwhelming. A guitar-playing mate from the Jazz School said to me that he’s the best guitarist in Australia. I could believe it on this performance. But everyone played his part well, and perhaps it’s unfair to single some out.

I give thanks that we have these dedicated musicians to commit to art like this and funding agencies (in this case, the Australia Council for the Arts) to support them, so we are not totally reduced to the lowest common denominator pap of the music marketplace*. Australia boasts three significant large creative jazz ensembles that I can think of – Ten Part Invention, Australian Art Orchestra and Mothership Orchestra. Don’t miss any one of them if you get the chance. Mothership are still on tour for a week or so, playing at the Goulburn Regional Conservatorium on 29 Sept, and Sydney's Seymour Centre on 30 Sept. Catch them if you can. 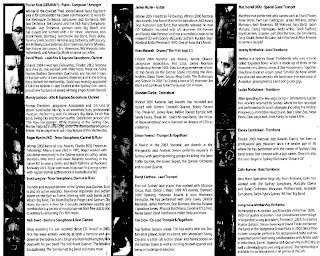 
* For more on jazz in free markets, “Is jazz dead? : or has it moved to a new address” by Stuart Nicholson (available from the Canberra Public Library Service)
Posted by Eric Pozza at 10:26 pm