Mike Nock returned triumphantly to Canberra. This time with grand piano, no sticking keys, new trio, and great venue with quality sound. He’s famous as our NZ-Australian with a long US history behind him (notably Art Blakey and Fourth Way) and for his strong support to young modern jazz players, especially in Sydney.

He didn’t disappoint. He was personable between tunes, and challenging and intelligent while playing. He writhes on the piano stool, and taps one or both feet, but what sound comes out! It was not the perfect smooth rendition: like so many top players, inventiveness and passion take the place of mere correctness as the measure of the performance. His approaches to soloing vary richly. As I was listening to one solo, I noticed the right and left hands mimicking each other with lines in different octaves, then a standard right hand solo against left hand chordal work, then melody in the right hand with fabulous discordant left hand harmonies. All this accompanied a soloistic freedom that moved over the harmonic and bar and chorus structure, and a fluidity with notes playing anywhere ahead or behind the beat, but always with authenticity and conviction. In the hands of someone like Mike Nock, you remember just how powerful the piano is as an instrument.

And his support were no slouches either. Mike Majkowski (double bass) is an upcoming star just 2 years out of the Sydney Conservatorium Jazz School. He supported effectively, led often enough, provided one of the compositions, and soloed with real maturity. And he had a great sound, and a lovely right hand technique. He also smiled a lot and kept good contact with Mike Nock. He was obviously having a good time. James Waples (drums) easily matched and supported the others. To me he seemed more cool, and he showed his mettle with subtle backing, controlled sounds and several solos, especially one lengthy standout solo at the end of the night.

The repertoire covered standards to originals to totally improvised on the spot (it’s a daring crew, this). It included Ellington’s “I let a song go out of my heart”, Bernie McGann’s “Spirit song”, Mike Nock’s “Blues for…”, the standard “Get out of town”, Mike Majkowski’s fluid original “Rising & falling”, Mike Nock’s mashup “So what, it’s summertime”, Green Dolphin Street, and Billy Strayhorn’s “Isfahan”. 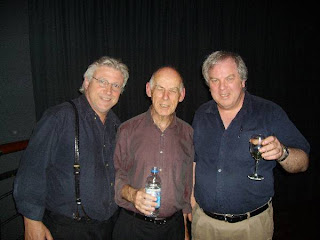 So a great night of excellent playing. There was a small but happy audience of ~90 people – high art always struggles against pop but moreso in this celebrity age. Thanks to Henk van Leeuwen for his work in promoting and touring quality music like this. And to Chris Deacon of ArtSound who recorded this concert. Keep an ear out for the replay on air sometime in the next month or so.