I’m at a loss. I remember hearing the Recording Ensemble several times in the last few years, and thinking their music was contemplative, sublime and clearly my preference amongst the larger ensembles at the CSM. Then a few nights back, CSM Big Band and the Commercial Band performed together, and now I’m not so sure. The Big Band started off the show; how I loved the insistent swing of Basie and standards and the more modern styles like Bob Mintzer. Then the Commercial Ensemble showed; it blew us out with funky styles and hard, clamourous bop and pop.

So, it was a great night at the Big Band Room at the Jazz School. There were lots of musicians on stage, and a good sized audience to view them, probably lots of friends and family. We were in for another night of big ensemble jazz. We’ve been lucky with these bands in Canberra recently – Bob Mintzer, Mothership, now this.

John Mackey introduced the Big Band. As its leader/tutor, he’s moved the Big Band over recent years to more modern charts, and even managed to get Bob Mintzer over to lead a performance of his own charts just weeks back. This is a band of about 18 players at any one time (there are several changes during the night, esp on drums, bass and piano). The lineup is piano, bass, drums, guitar, 4xtrumpets, 5xsaxes/flutes, 4xtrombones, and vocals. On the night, the charts covered modern (including Bright lights, Original people and Latin dance by Bob Mintzer), the Basie-style Hayburner, L.O.V.E., a great old standard with vocals, and an original by Jenna Cave, an advanced student at the CSM who is composing some very interesting and mature tunes. There were good solos all around. Again, I found some hard to hear – there’s plenty of volume in such a large ensemble, especially when the rhythm section gets worked up, or the brass provides fills, and individual players can easily get lost. I loved the changing tonalities as lines moved between sweet flutes, sinuous saxes, smooth troms and spluttering trumpets, the real excitement in Latin dance, and the sublime swing in L.O.V.E. I must say, it was great to hear a voice, too. Madeline Hawkes always seems to fully commit herself to the tunes she sings - so much so that I even enjoyed Moondance, which is not a favourite of mine (otherwise, Madeline sings along with the trumpet lines as a member of that section). So by interval, I’d fallen in love with big band standards and swing again. 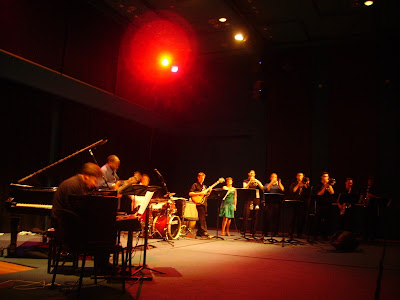 Then the Commercial Band arrived. They are a smaller and more punchy affair. Eric Ajaye led on bass (Eric is also the leader/tutor), with drums, piano, guitar, vocals, 2xtrombone, 2xtrumpet, 1xtenor and 1xalto. This was fun, loud, pushy, funky. The band started with a hard-hitting version of Naima (you wouldn’t call this version “sublime”) and moved on to Wayne Shorter and Freddie Hubbard. This band had a singer too. Sophie Leslie sang Billy Joel’s New York state of mind, and later Boplicity. I’m not sure if the words of Boplicity were original, but they were fast. Otherwise, Sophie also sang horn lines. Then Eric introduced the David Letterman theme, and opined on the great musos playing for that show, followed by a 70s-style funk tune called Old School. So, slap bass, hot walks, screaming guitars and synth and horn solos. This was fun. By the end of the night, I’d changed my opinion again: I’d decided the commercial funk style was my favourite.

One thing I noticed on the night was how effective were the female singers (Madeline and Sophie) singing lines with the trumpets. They gave a lovely sweet aspect to the harsher trumpet sounds, and they were surprisingly audible despite the volume of the trumpets. And, of course, how easily we forget the beauty of the voice, and how it makes music so much more personable – in other words, I loved hearing singing in this context.

I don’t have all the names, but solos were played by a whole string of players on the night: James LeFevre (tenor), Luke Sweeting and Mike Azzopardi (piano), Sebastian Macintosh and Alistair Clark (trombone), Jono Apps (trumpet), Carl Morgan and Daniel Hunter (guitar), Michael Cleaver (alto), Ed Rodriguez (drums), Eric Ajaye (bass). (If I missed any solos, I apologise; just email me).

So what’s my favourite of the CSM large ensembles now? Just at the moment, it’s the Commercial Ensemble, but that happens to also be the last one I’ve heard. So I can’t promise my preferences won’t change again after each performance at Moruya.

The bands are playing at the Moruya and Wangaratta Festivals over coming weeks. So catch them if you can. They are wonderfully capable and entertaining ensembles.
Posted by Eric Pozza at 7:03 pm