It was another successful outing at the White Eagle last night: two bands, several jams and another ArtSound recording. 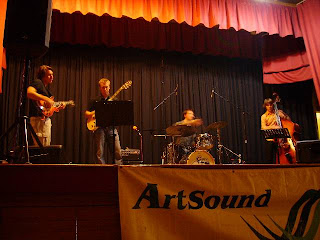 The Sam Young Quartet opened the night with a guitar-based sound that you seldom hear in the jazz scene. That’s a shame, because this was an interesting and involving set, reminiscent to me of the 60s/70s electronic jazz of Miles (the era of Bitches Brew and Jack Johnson). SYQ comprised Sam Young (drums), Jarrah Jones (guitar), Aron Lyon (guitar) and Gareth Hill (bass). They played originals, variously by Gareth, Sam and Aron, as well as Wayne Shorter’s “Mascalero”. The music was mostly intense and pensive, but there were occasional dramatic flourishes (for example, Sam’s opening for his original, “The breaks”) and the final tune by Aron was more upbeat. Most guitar solos and melodies were played by Aron, accompanied by Jarrah’s chordal work. I’ve been impressed by Jarrah’s chordal work in several performances. His interesting voicings and free movement over rhythmic structures generally loosen up a band. They particularly suited this era. Aron was playing with rich effects and the combination with Jarrah made for a modern sound with complex heads and solos. Sam and Gareth are both highly capable players in their own rights, both as accompanists and as soloists, so the performance was a joy (if you can say “joyful” for this style of music). The sound was a little muddy at times, and there were some problems with hum, but otherwise much enjoyed. 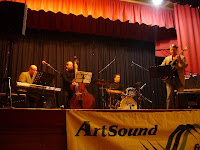 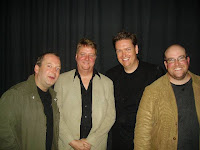 The Wayne Kelly Quartet followed with a very different style of music. This was more straight-ahead rhythmically, harmonically more defined, instrumentally less effected and with more clear distinction of solos. So, it seemed more structured or patterned than the fluid style that SYQ played (although really it wasn’t). But these guys were so professional. They played tight, over complex tunes, and passed great solos around. The music was original – plenty of tunes from Wayne’s recent CD, and a few by Mike. WKQ were Wayne Kelly (piano), Brendan Clarke (bass), Mike Price (guitar) and Mark Sutton (drums). There were tons of high points to note. Amongst others, I remember: excellent accompaniment by Brendan (he’s a great bassist, with an unusual sweet and rounded tone); an excellent solo at the end from Mark; a very appropriate tune by Mike called “Young guns” (he’d see lots as the head of the Jazz School) with a very appropriate solo (including sweeps, patterns and sidestepping, which are outside Mike’s normal style); Brendan’s charts falling from his new music stand and him organising them with his feet while playing (funnier than most jokes you commonly hear on stage); Wayne’s great tunes from his recent CD. Wayne gave away some of his influences in the names of a few tunes: “Mr Hank Mobley” and “Dr Kirkland Blues”. Overall, highly professional and highly swinging.

The night finished with a few student jams. The next White Eagle session features the Jess Green Sextet with Neils Rosendahl on 7 Dec.