Another great night was had at the White Eagle last night. This is only the third night, but these sessions are developing well, and promise to create quite a stir over time. Last night it was a double bill with the Gerard Masters Trio (Sydney) and the John Mackey Quartet, followed, of course, by the jazz jam session. 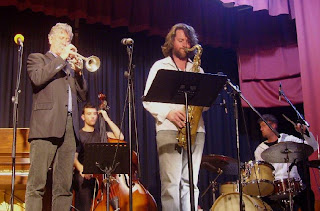 First on was John Mackey (tenor) with Miroslav Bukovsky (trumpet), Bill Williams (bass) and Ed Rodrigues (drums). John and Miro are teachers at the CSM, so considerable talents with lengthy histories. The tunes were originals, I think mostly from John’s portfolio but including some from Miro. The style is probably best described as hard bop, in the idiom of Art Blakey: solid rhythms, fast walks, sharp unison heads, long structured solos and dynamics rising and falling with the solo changes. John plays challenging solos in the style of Coltrane. Good, authentic, inventive stuff; in and out of the harmonies, all over the beat, and lots of impassioned sounds. Miro was a bit of a surprise to me. I usually picture his playing in the context of Wunderlust rather than in a bop-style, but he did this admirably well. Sharp playing, fast runs, clean playing. Bill and Ed are students (only 2nd year, I think, but it doesn’t show). Ed’s playing with great confidence these days – he was lively and busy and relevant both this night and the night before with the large ensembles. Bill has a great reputation. Just the other day, someone was praising his 300bpm walks at a recent concert practice. He put down a solid and reliable undercurrent, and played interesting solos, and fitted comfortably with Ed. This was a nice band, presumably put together for the night but very capable.

The Sydney import in the second set was obviously awaited with anticipation by the CSM students. They have been saying for some time (in awe, it seemed to me) that Gerard Masters was coming for the next White Eagle session. This was no let down. It was a sublime performance by a piano master with an elite pair of offsiders. Gerard Masters has been selected to contest the Piano prize at this year’s Wangaratta Festival, and we could see why. 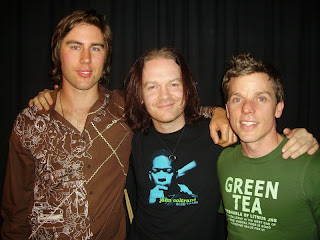 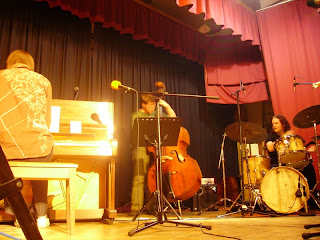 The trio was Gerard Masters (piano), Cameron Undy (bass) and Dave Goodman (drums). Again, the music was mostly band originals by Gerard, but included one from Cameron’s sister, Fiona, and another by Sean Wayland. This was subtle and complex music. There was a good deal of swing at times, but it also had Euro elements; no II-Vs here. Gerard plays incredibly mobile interpretations of the harmonic structure. His substitute chordal work is constant, ongoing and convincing; sometimes hard-on soloing, other times gentle and intuitive. Cameron is also a master in this style. He could freely move over the fingerboard, but he’d play simply, then intersperce with incredibly fast and complex little runs. He’s a master of that fingerboard: fast and comfortable and always appropriate. And Dave was there with a big grin, and similarly relevant playing. Dave’s grin was a bit of a symbol for the band – they communicated well, enjoyed each others’ playing, and it showed. But to me, the defining issue was how they could portray the essence of a tune. They were not just running chords, but voicing the very character and meaning of the pieces they were playing. They are trained - that’s clear - but I was surprised by their young age and real musical maturity. These are guys to watch. Too bad about the poorly-tuned piano, but nothing in life is perfect.

Both these concerts were recorded by Chris Deacon of ArtSound, so they should appear on radio in coming weeks.
Posted by Eric Pozza at 11:29 am