I got to the Wagga Jazz Festival last weekend (this year it was Fri 8 – Sun 10 September). First thoughts? The venues are fairly spread out, so there’s a bit of walking, but there was a free courtesy bus running between venues. There were 8 stages, in 5 main venues. The equipment was very good: big JBL PAs that were great, but total overkill; upright pianos being constantly retuned; bass amps like SWR, Ampeg, Hartke and Yamaha and good drums kits.

The festival had a lot of traditional, or old-style jazz formats (perhaps more so this year?), so it didn’t have quite the appeal to the CJ modern-jazz crowd. But I enjoyed a few bands. 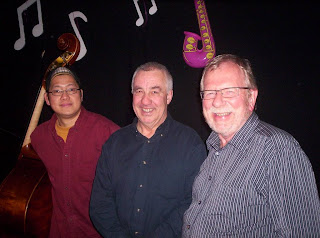 The mainstream cum modern Jeff Bartram Trio from Melbourne played the first set I heard that interested me, so they came somewhat as a relief. JBT is Jeff Bartram (piano), Graham Morris (drums) and Geoff Woods (bass). Jeff plays a modern style and does it well, and is well accompanied by the others. My impression was that the bassist was new to the band, but he did a perfectly good job. JB provides an amusing, commentary as he jumps up and down from the piano between tunes. They played standards: Stella…, Daydream (Ellington/Strayhorn), Old folks, Whisper not, Lush life and the like. Nice tunes, with a steady backing, and a piano moving pretty freely over the bar structure, with a fair degree of interesting dissonance. Nice stuff. I caught JBT the next day as the Rising Sun Quartet with Ron Anderson (sax, flute). RSQ were also interesting and capable. A real surprise came when Ron Anderson took over the piano as the Ron Anderson Trio and led a perfectly capable piano trio set; impressive. 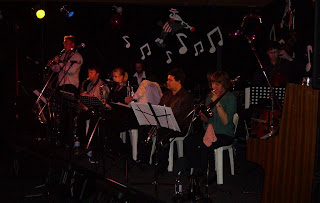 I’m currently reading “Is jazz dead? : or has it moved to a new address” by Stuart Nicholson. In short, it argues that jazz has become a museum piece in the US, and that the Marsalis phenomenon (young lions playing dead styles; an essentially conservative approach to jazz and the production of a classical jazz canon) has considerable responsibility for it (along with commercial interests and jazz education). I’m not taking sides, but I can confirm it is deeply researched, and he has some incredibly damning quotes from people of the highest stature in jazz, so it’s worth consideration. So, I was thinking about this while I listened to McQuaid’s band and the whole Wagga Festival. And my concerns grew when I heard some trad-type making denigrating comments about modern styles over the PA at one venue. This is not unknown at other jazz festivals, and, at the very least, it’s bad manners.

Otherwise, I liked a small group of school-aged kids called Blind Pilot. They were a little out of place playing an alt-rock set rather than a jazz one. But they had good vocals, at least one interesting original tune, and not a grey hair amongst them. Worth watching with more experience. I also caught the last tune of the Australian Army Band Kapooka. Professional, entertaining and slick as always. Otherwise, it was trad, or sitting over a beer in one venue or another. 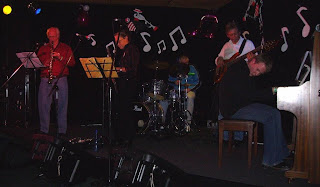 I played latin/funk with Sandias at Wagga. Sandias were Oliver Hague (sax), Margaret Hancocks (flute), Liam Wilson (piano), Mike Smith (drums) and Eric Pozza (bass). At its best, Sandias plays some tasteful melodies with the front line (the sax and flute can sound really sweet together) on top of interesting grooves, thanks especially to Liam's reliable cross-rhythms. On the day, we weren't playing our best, especially for the second set, but, hey, there's always Moruya.

As for Wagga, my motel was cheap, the architecture was very interesting and some of the local night-owls were openly abusive and threatening. Admittedly, Wagga’s not the only place you experience this, but it happened separately to both me and another of my party, and it was not pleasant, and it left a bad taste. So, I enjoyed it well enough, but I was not ecstatic.

What about the drummer mate he is bit of a star as well a s good driver. For those who dont know i am the drummer with Sandias. We had trio made up of Eric, Liam and myself and i think, not wanting to sound too modest, we are bloody good too. I found also the venue,s were too spread out but the bus, i found out on the last day, was a good idea. By the way for those who think Eric can sing, he cant. Ask the people in the Chinese where we had dinner.