A CD is more a challenge than a live gig. It’s a statement. It doesn’t disappear into the ether like a gig, so you need to produce a worthy work, and be proud enough to promote it. So hearing one impressive track on ArtSound when this CD was the feature of the week raised my interest, and then getting an email from Sally Greenaway to promote it was doubly interesting. 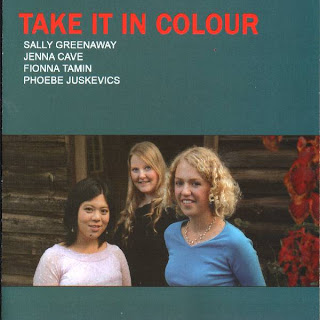 Take it in colour is satisfying for several other reasons. Firstly, it highlights the work of women in jazz; in this case, four young but very accomplished women. Secondly, these are not just women performers blowing a set of standards, but four composers with a range of styles (most important). Thirdly, it’s a diverse mixture of formats – big band, large ensemble, various smaller combos, with and without vocals, and solo percussion. And fourthly, perhaps as an aside, it’s a product of the CSM’s recording studio. So I found this album fascinating in its diversity and accomplishment but also just plain entertaining.

Jenna Cave opens the set with big band and large ensemble pieces. Jenna is an alto sax player, majors in composition, and is a member of the CSM Recording Ensemble. She offers three tunes with richly orchestrated arrangements with surprising maturity. The first, Cardinal Lemoine, recalls Jenna’s time in Paris. The second, Journey, is a complex, more composed piece, with four parts of distinctly different rhythms and feels, including fast modal and 6/4 swing. Jenna also reappears later on the CD with a song, Through the sky, where the voice part is strangely horn-like. The large intervals are ably handled by Madeline Hawke, and the balance (including the voice being occasionally lost in large horn sections) confirms the impression of an instrumental part.

Sally Greenaway follows Jenna’s opening with three tunes. Sally is a piano player, and the one player I knew of before this CD. Sally’s is a quite different set: it’s more restrained, matching the nature of her solo playing. She starts with Sequira, a piano trio (piano, bass and percussion) with an Egyptian theme. I heard Asian, at least in the keyboard sound, but the harmony sounded more Middle-Eastern. Percussion rather than drum kit gives the tune a different flavour. A big band tune, E11eventy, follows. Again I heard echoes of Bill Evans’ Sketches of Spain (I’d heard it earlier in Jenna’s Journey). This is a fairly simple tune with parallel harmonies, but it has an unforced nature that is wonderfully self-evident. I liked it. Sally’s third tune, Lymph node, is another complex piece, this one dedicated to her father.

Fionna Tamin offered another change: she writes and sings two songs, Coffee song and I’d live better in my dreams, and performs them in a standard small combo format. These are in a popular style, but they are engaging. The first mulls over a lost, but imperfect, love while sitting with a coffee. The second tells of a series of dreams she had in her home of Jakarta. They reminded me of US West Coast styles, especially Michael Franks. Guitar-based, light but entertaining and interesting.

Phoebe Juskevics finishes off the set. Firstly with a tune with a disconcerting title, Beautiful hate. It’s a trio improvisation with piano, bass and percussion in two parts. Interestingly, her second offering, Freedom, is a percussion solo at the end of the CD: a great and unexpected twist to round off the session. Sadly, Phoebe was overseas so she’s missing from the cover pic.

If you’ve got the feeling that this is a good outing for lots of the students (given plenty of solos and big band arrangements), you’re right. Twenty-four players appear on the CD, and the names I know are virtually all students. I was impressed by the quality of the ensemble playing. I felt a few solos lacked confidence in the studio environment (it’s a hard call to turn on your improvisation on call in that environment), but the band playing was really good – the rhythms were solid and tight, and the harmonies were well pitched. Congratulations are definitely due here to both students and their teachers. I’ll single out Michael Azzopardi (piano) and Neils Rosendahl (saxes) for their solos – these really are players of note, and the quality of their solos is no surprise. I also liked Sally Greenaway’s solos, which are expressive and introspective, and Ben Roger’s bass playing and especially his lovely jazz bass tone.

So, Take it in colour is a very satisfying CD and a most impressive effort for these four women (and their colleagues), doubly so given it's their first outing.