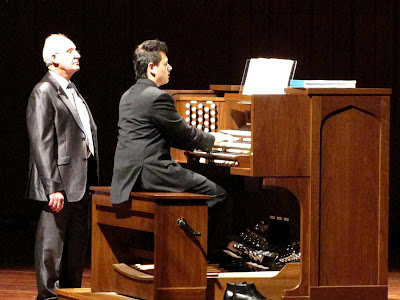 The weekend was one of audio indulgences. One was the overwhelming sounds of a pipe organ (or at least its digital equivalent) playing Bach and the repertoire. Mark Sever played the Allen Organ at Llewellyn Hall for its first solo performance. The School of Music has had this organ for several months, and I’d heard it in performance, but obviously not as a solo instrument. This is a fully digital instrument. I found the sounds very authentic, although perhaps not as thunderous or reverberantly complex as organs I’ve heard in smaller European churches. This is a big space and not busy like many old churches. Every instrument has its unique characteristics, of course, and organs are delightful for those soft-edged tones and smaller pipe sounds and those deep and pure fundamentals. 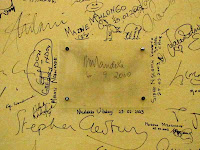 Marko played an interesting repertoire. Firstly, JS Bachs’ Toccata & Fugue in F major. Not explosive like the D minor, but obviously Bach, and interestingly with passages of solo bass melodies played with feet. Then three Bach preludes and Fantasia a gusto Italiano by Krebs. Gusto Italiano obviously means lively temperament for Krebs because this had big, ebullient chords. Then one that sounded closed with crumhorn-type sounds: Introduction and Passacaglia by Reger. Another Italianate work, Sicilienne by Duruflé which occasionally sounded to me of male choirs. Then a few more modern pieces. Moto ostinato by Eben that sounded of damsels frollicking in the woods but with the lurking dangers inherent in clear and true bass fundamentals. Then a disjointed, filmic sounding piece by Brumby and an encore of Widor’s Toccata from Symphony no.5 with big and unexpected dynamics. Great music and a very informative repertoire. And special thanks to Bob Compton who has been instrumental in this instrument getting to the Llewellyn. BTW, the Mandela signature is from the signature wall of the Green Room at the ANU School of Music. 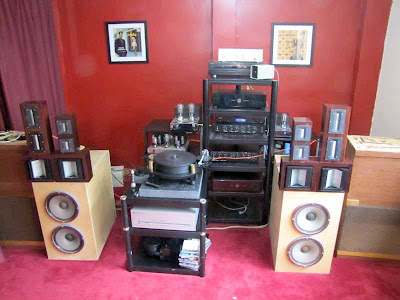 The other audio indulgence was to listen to a string of CDs and LPs on a 5-way hi-fi system of about 1,000 watts. This is hi-fi as few of us experience it. Suddenly you understand why audiophiles prefer analogue vinyl: it’s just sweeter, although I hear the best A-D converters can improve CDs. Quite an experience. Thanks to Paul.
Posted by Eric Pozza at 11:39 am