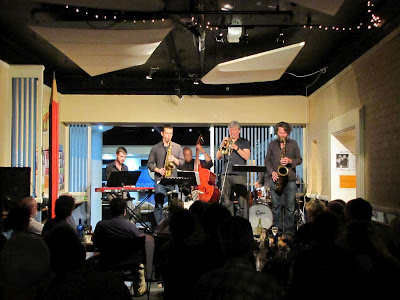 Text and pics by Mandy See

mBASS are not new in Canberra – leader John Mackey said they’d been playing as a band for a year – but we haven’t heard them until now. The band is made up of the best of local musicians, mostly teachers at the Music School. The format is close to the famous bands of the cool era with an additional tenor sax player. This extra player gives the band a richer harmony and also an extra soloist. They also play music of the cool era, at least this night, as well as their own. In fact, the first set was a tribute to the most famous album of the cool era: Kind of Blue by Miles Davis. It’s beautiful to hear the strains of this much-loved album from such good musicians with such affinity for the music. Someone told me he’d bought the 50-th anniversary commemoration album. Kind of Blue is like that, the classic of all classics, the album that defined the cool era. The next set was short after the long first set. They played an original song from Miroslav, then Eighty-one, which was written by Miles Davis with his bassist Ron Carter, and the beautiful Body and Soul. A lovely evening of music that took many of us back to our first jazz experiences. Cool music but also hot playing.
Posted by Eric Pozza at 1:39 pm