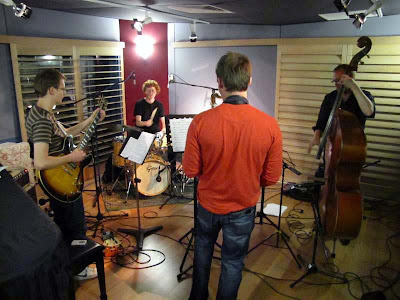 Geneva-based guitarist Daniel Hunter is over for a family Christmas. It’s great when the local jazz family returns. The old bands reform with old off-siders coming out of the woodwork and maybe a few interlopers to replace unavailable players. The old tunes are revisited, more mature and developed in the mind of the leader, along with a swag of new numbers in the genre. Daniel’s outing was just this. Niels and Phill were of Daniel’s era. I think Aidan is a later invitee. The Daniel Hunter [Canberra] Group were performing for a Friday Night Live broadcast for ArtSound. 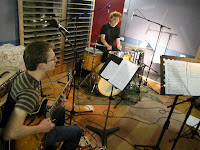 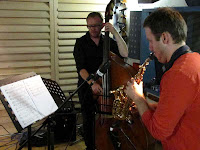 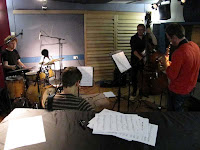 Phill was outside as I arrived at ArtSound. I commented on the original material. He mentioned the counting. Daniel’s tunes can be like that. Not contorted, but presumably led by melody, so the bars change with the flow of the tune. It makes for a direct and true relationship with the melody but it can be a cad to read. But there’s also plenty of space for solos. The formats are still head-solos-melody, although not obviously, and they still break out in solos and swap fours and the like. Daniel’s got a dirty sound, with an obvious bluesy, gritty Scofield influence (Daniel’s tribute Sco-feel gives this away). It’s earthy and authentic: not shredding, but true in form and lyricism and with comfy rhythmic sense. Niels is a lovely, strong and often understated player, but so reliable and honest and always ready to bend the harmonies to good effect. Rufus Reid says a bassist must be “at home, minding the store”, meaning he must independently state the pulse and the harmony. Phill may have played a solo during the set (I didn’t hear a solo but I didn’t hear both full sets) but I feel comfortable when he’s minding the store – he’s solid and capably reliable, not fancy notes but right ones. Aidan is the go-to drummer around the jazz school and his solidity and aptness showed with precise fills against up bop swing on Circulation, or mallets on the more pensive L’alchemiste.

Thanks a lot Eric! It was good to see you. Catch you on Thursday!

And a big thank you Andy Campbell for lending his amp!