Rain, rain go away (but not forever) 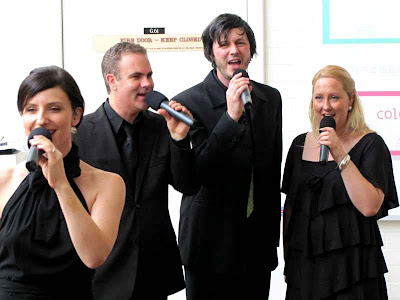 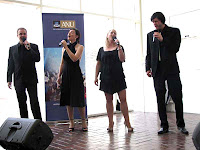 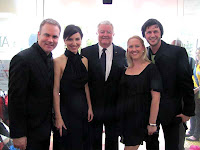 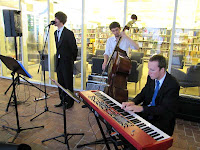 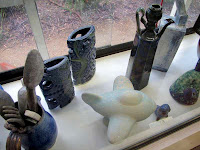 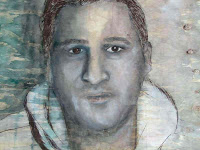 Are tropical rains the idea of north? It was certainly wet and soggy at the Art School for this year’s ANU Summer Reception, but there was still a decent crowd for Idea of North performing a short set and the Liam Budge trio playing as support. I luxuriated in the lovely voices and the vibrant presence of the North. Changing front line singers with tasteful backing lines, grooving to steady vocal bass lines and occasional solos (this set had a vocal harmonica solo from tenor and a drum solo from bass). I wondered if the singers were SATB. They confirmed they are, but a jazz SATB is rather different from a classical choir of the same format. The bassist is the most different, taking on genuine double bass-type syncopations rather than low-pitch vocal harmonies, and sometime beatbox drums. And other players performing occasional “instrumental” solos, or at least the tenor did in this set. It seemed they all took time in the limelight, someone coming out front for each tune to feature as melody. There was a bit of friendly patter on stage, and constant movement for these front lines changes and a huddle between songs (I guess this was a pretty informal gig for them) and the grooving and moving that singers do when there’s a good beat going. And the beat was good. I really felt comfortable with the bass. Andrew is described as “bass / percussion” and he certainly carried the groove with aplomb. But then he’s been doing this for 17 years. They only sang one set, and I didn’t hear it all, but these were popular modern numbers done with great skill, great groove, wonderfully accurate voices and sharp arrangements. One tune was Aretha Franklin; another (with the harmonica solo) was Stevie Wonder’s Isn’t she lovely. Just fabulously classy vocals and great entertainment. Would love to have heard more.

I also caught Liam Budge fronting Caleb Wearne and Callum Stewart with nice vocal interpretations of the standards and a nod to his teacher, Vince Jones. But a university reception is mostly everything but the music. It’s chatting with friends, spotting the academic celebrities, battling for a bite, checking out the latest student art and enjoying free grog, so just few words on the music.

Just catching up Eric. It was such a treat - and worth braving the rain - to get to hear the Idea of North again. They are so "together", so professional in look and sound, and more to the point, they engage well with their audience.

Great pics of their little set too.