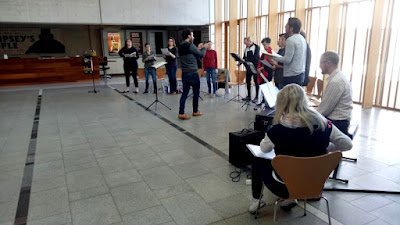 Sunday morning was an unusual outing, to the National Portrait Gallery to sit in on an open rehearsal of a Handel Oratorio. It was in the foyer, so very public, led by Tobias Cole with a few familiar faces amongst the 10-or-so singers. Anthony Smith played piano accompaniment (nothing unexpected there) and a choreographer sat next to Anthony, jotting on various papers, occasionally getting up to test some steps.

I heard 90 minutes of voice rehearsals. There were to be a few minutes of choreography, but I couldn't stay. The music was divine, of course, and the singers well up to it. Interesting to see the approaches to learning the songs: sometimes just saying phrases to confirm rhythm; most times singing in harmony. These singers are capable, so single sections didn't often need to sing their parts alone, but it did happen. They had music, but they also had eyes for Tobias, the director, and he's active so a very strong guidance. I've had one choir session with him and I can confirm that: learning related skills; playing with dissonances; spelling out rhythms; singing interesting scales, was it diminisheds? This was luscious music with cascading lines of this period and grand, coronational melodies. Lovely, certainly worthy of attendance. This will be Tobias' third Handel oratorio in three years: a worthy pursuit. Looking forward to it in late-October at the Playhouse. And another open rehearsal sometime before then.